The Winchester name has a rich military history, both in America and around the globe.  Building on the lessons Oliver Winchester learned during the American Civil War of 1861-1865, Winchester Repeating Arms offered numerous lever-actions, including the Models 1866, 1873, 1876, 1886, 1892, 1894 and 1895 for military sales. While the response from the American military was generally cool, many foreign governments found the rapid-fire capability of Winchester firearms very attractive. France, Imperial Russia, Great Britain and the Ottoman Empire all made official or unofficial purchases of many thousands of Winchester guns throughout the last quarter of the 19th century and the first two decades of the 20th century.

The American public was stunned in July of 1876 by the defeat of George Armstrong Custer at the Little Big Horn River in the Montana Territory. Almost 270 troops were lost in the battle, and many reports indicated that the firepower advantage provided by the Indians’ Winchester repeaters over the soldier’s antiquated single-shot rifles was a decisive factor in their defeat.

Winchester first foray into bolt action military rifles was with the Winchester Hotchkiss rifle. The Winchester Hotchkiss was a unique rifle with a number of innovative features. It was originally designed and patented by rifle designer Benjamin B. Hotchkiss in 1876. Winchester purchased the design, did some significant improvements and -- after a short industrialization period --  the rifle was approved by the U.S. government and a contract was signed. Winchester began producing the rifles at the Winchester Repeating Arms factory in New Haven, Connecticut. A number of rifles were also produced at the Springfield Armory starting in 1878. The 1882/83 models received a number of contracts from countries around the world and about 84,500 of all models combined were produced. The rifle never saw extensive service with the U.S. military, with most government and military leaders preferring Trapdoor Springfield rifles over any of the new repeaters being developed at the time.

In 1895 the U.S. Navy contracted with Winchester Repeating Arms for the production of the Lee Straight Pull Musket Rifle. It was one of the first U.S. bolt-action military rifles to use smokeless powder and its tiny 6mm bore size was a radical departure from traditional large-bore service rifle cartridges.

The first internal box magazine. The Model 1895 was the first Winchester lever-action that used an internal box magazine. This allowed the use of modern sharp pointed ammo and was designed with military applications in mind. The U.S. Military ordered 10,000 Model 1895 muskets chambered in 30-40 Krag during the 1898 Spanish American War. With the start of World War I in 1914, Winchester devoted much of its manufacturing capacity to producing military rifles, ammunition and war material. At the height of the war effort the Winchester Repeating Arms plant in New Haven encompassed 3 million square feet of factory floor space and employed more than 17,500 workers. The following year the Enfield Pattern Number 14 bolt-action rifle in 303 British would constitute significant output, and nearly a quarter-million guns were soon to arm the British Army in the muddy trenches of France. Winchester also built nearly 300,000 Model 1895 lever-actions for Czar Nicholas II of Russia. Chambered in 7.62x54R, they armed units throughout the Russian Empire. (In fact many of these same rifles were sold in 1936 by Marshal Joseph Stalin to arm factions in the Spanish Civil War.)

The M1 Garand. This is a photo of the George S. Patton M1 Garand, made especially to honor him.

Unusual rifle orders. One unusual WWI order for Winchester was from Great Britain for a small quantity of Model 1886 lever-action rifles chambered in 45-90. They were to be used with incendiary ammunition by “aeroplane gunners” to ignite the flammable hydrogen gas filling the German zeppelins that were bombing London nightly. When America was drawn into WWI, the need for rifles to arm millions of Doughboys headed for Europe was acute. Winchester Repeating Arms quickly modified the Enfield Number 14 Pattern rifle to handle the U.S.-standard 30-06 Springfield cartridge and the U.S. Model 1917 Enfield was born. Some 545,000 of these rifles were produced by Winchester Repeating Arms, making it the most widely used rifle by American troops during the conflict.

Other Winchester Repeating Arms contributions during WWI were the production of 47,000 Model 1918 Browning Automatic Rifles (BARs), modifying the Model 1897 pump shotgun into the famous “Trench Broom” for close-quarters fighting, and collaborating on the development of the .50 caliber cartridge for the M2 Browning heavy machine gun.

The M2. The M2 proved so adaptable and durable it’s still in active service to this day. Winchester’s ammunition contribution during WWI included producing almost 900 million rounds of small arms ammunition for the U.S. military. As the clouds of war again gathered in 1939, Winchester Repeating Arms began to fill an initial order for 65,000 M1 Garand rifles for the U.S. Military. Two years later largescale production commenced and by the end of the conflict a half-million M1 Garands had rolled out of the New Haven facility. Winchester Repeating Arms was the only private firm entrusted with production of the M1 Garand during all of WWII. The M1 Garand was the mainstay of the American infantry through WWII and the Korean War. General George S. Patton, Jr. emphatically declared the M1 Garand as “…the greatest battle implement ever devised.” In 1944 Winchester Repeating Arms even built a special presentation grade M1 Garand for General Patton.

The M1 Carbine. Under the extreme pressures of the war, Winchester engineers developed a light military carbine and cartridge. They delivered the working models to military evaluators in less than 2 weeks. Chambered for a reduced-power .30 caliber cartridge it was quickly adopted by the U.S. Military. With all production capacity now dedicated to the Allied war effort, Winchester Repeating Arms built more than 800,000 M1 carbines during WWII. The trim gun, a favorite of U.S. officers, NCOs and paratroopers, became the most-produced American firearm of the conflict with more than six million made.

Herb Parsons. Winchester’s contributions to the Allied war effort were not limited to making guns. Exhibition shooter Herb Parsons served as a gunnery instructor, and aircraft gunners were encouraged to hone their shooting skills on the skeet and trap fields. During the war Winchester’s sister company U.S. Cartridge built and operated the St. Louis Ordinance Plant for the U.S. Government, the largest small arms ammo plant in the nation.

The cold war spurs development. As WWII transitioned into the Cold War, Winchester Repeating Arms remained at the forefront of military arms and ammunition. A new sporting cartridge, called the 308 Winchester was introduced in 1952, and soon became the new standard infantry rifle cartridge for all nations in the North Atlantic Treaty Organization (NATO). With the new NATO cartridge came a new U.S. infantry rifle, dubbed the M14. Adopted in 1957, the M14 drew its basic design from the M1 Garand but added a detachable box magazine and selective fire capability.

Winchester was soon picked by the U.S. Military to produce more than 350,000 of these rifles. An accurate and robust weapon, the M14 would remain popular with service rifle shooters for decades to come. Many M14 rifles would be dusted off a half century later to equip a new generation of U.S. soldiers fighting the War on Terror in places like Iraq and Afghanistan.

Who designed the M1 Carbine at Winchester Repeating Arms is a topic of much debate and more. The movie "Carbine Williams," staring Jimmy Stewart, did little to clarify the question. David Marsh “Carbine” Williams was a larger-than-life character – widely considered by his peers to be both a brilliant gun designer and a challenging personality to work with. During the time the M1 Carbine was in development Mr. Williams was an employee on the Winchester design and engineering staff, along with Edwin Pugsley, William C. Roemer, Ralph Clarkson, Fred Humeston, Cliff Farner and many others.

While, after 75 years, the day-to-day involvement of Mr. Williams in the final version of the M1 Carbine might be the subject of some debate, innovations like his patented short-stroke gas piston system are part-and-parcel of the gun’s design. Without “Carbine” Williams we would not have the M1 Carbine as we know it today.

We will leave this issue to the more studied historians to define the events for future generations. 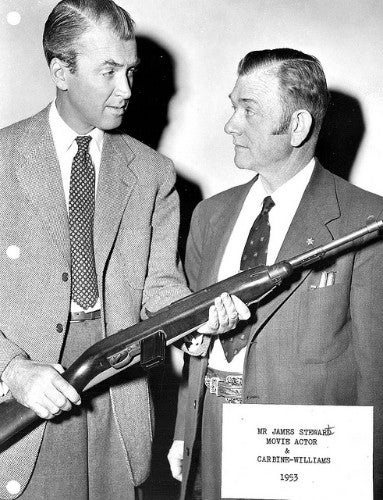 The Hathcock legend. No Winchester military history would be complete without recounting the heroic exploits of Sgt. Carlos N. Hathcock II, USMC. A former NRA Wimbledon Cup winner at Camp Perry, Hathcock was assigned in 1966 to sniper duty with the First Marine Division in South Vietnam. Because a purpose-built sniper rifle was still some years in the future, Marine snipers used the Corps’ standard 30-06 Winchester Model 70 match rifle, and most of them were well-used guns drawn from stateside armories. Known by the white feather he wore in his boonie hat, Hathcock’s marksmanship skills produced 93 confirmed enemy kills and prompted the Viet Cong to place a bounty of $30,000 on his head. After two tours of duty  Hathcock became the most well-known sniper of the conflict, and went on to instruct at the USMC’s Scout-Sniper School in Quantico, Virginia.

Gulf War and the war on terrorism. During the Gulf War more than 90% of the small arms ammunition used by U.S. forces was produced by Winchester. Today as the United States enters a second decade in the  global war on terrorism, Winchester has delivered more than two billion rounds of ammunition for America’s troops. 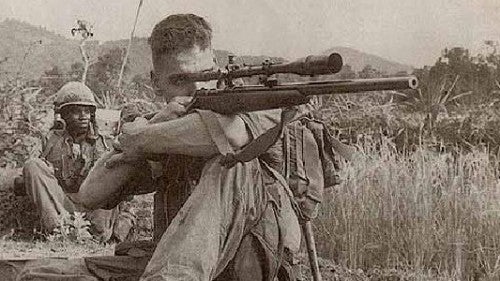 No Winchester military history would be complete without recounting the heroic exploits of Sgt. Carlos N. Hathcock II.

Copyright Winchester Repeating Arms, 2015. 2016, 2017. This is historical information collected from numerous sources and accounts. Some details vary from historian to historian. Photos used in this historical review are, to the best of our knowledge, in the public domain, or used with permission.