Sportsman’s Warehouse is proud to be the exclusive retailer of the Golden Spike 150th Anniversary rifles. A 150th Model 1866 (sold out) and a 150th Model 1873 (still available) have been created as part of the celebration.

Representatives are available Monday through Friday, 8:00 a.m. to 6:00 p.m. (MST). The rifles will be manufactured later this year and will ship to your local Sportsman’s Warehouse for pick up in spring 2019.

Go to www.sportsmanswarehouse.com for information on the Golden Spike 150th Anniversary Rifles.

A rifle to commemorate one of the landmark events of the old American West. On May 10, 1869, the Union Pacific and Central Pacific railroads met at Promontory Summit, Utah, where the two were linked by a final, ceremonial spike made of gold. Our nation, still recovering from the Civil War, was finally unified by a transcontinental ribbon of steel stretching from sea to shining sea.

The Winchester® Model 1866 Golden Spike 150th Anniversary Commemorative Rifle celebrates this monumental milestone of perseverance and innovation, which stands as one of the most significant events in American history.

A companion Model 1873 version is available as part of the commemoration. 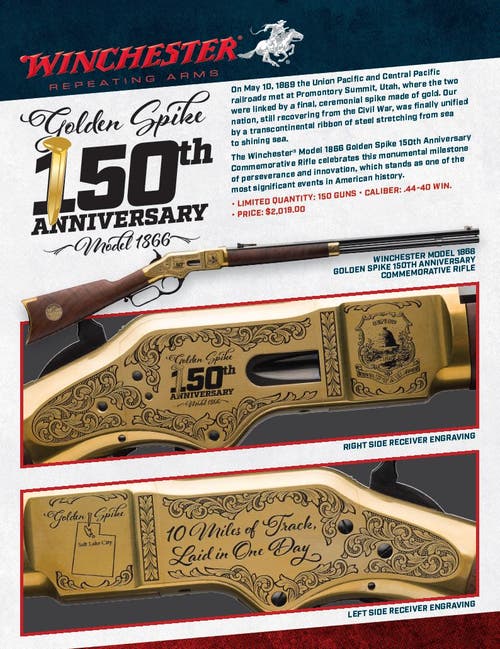 DOWNLOAD A FLYER WITH ORDERING INFORMATION ON THE GOLDEN SPIKE 150TH WINCHESTERS.