Where are Winchester firearms manufactured? 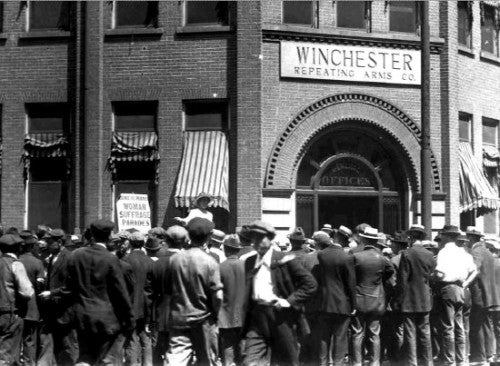 Where is my Winchester made? This is one of the most-asked questions we receive. This is primarily due to Winchester's complex history and because there have been significant changes in factories and locations for production over the past 20 years or so. For most of the history of Winchester, firearms production was primarily centered in one place . . . the historic factory in New Haven, Connecticut, U.S.A. This is not true today.

A complex history. Although most guns though the history of Winchester Repeating Arms were produced at the historic New Haven factory, that has not always been the only factory. A fairly large number of guns were also produced in Canada at the Cooey plant, which was purchased by Olin Corporation -- Winchester-Western --  in the early 1960s. The Canada facility has not been part of Winchester for many years.

The history of Winchester becomes more complex in recent years with Winchester firearms becoming separate from Winchester Ammunition (Olin) in 1981 and with ownership of the factory and license of the brand changing several times. Under new ownership/management, a new philosophy for production emerged in the early 1990s. This was when Winchester firearms production became part of what is now the Herstal Group. Since then, Winchester rifles and shotguns have been produced at associated factories in many locations around the world. A more global approach to manufacturing began and a new emphasis on growth of the line, a greater commitment to quality and a strong push to improve overall product value began. The reintroduction of the Model 1885, the Model 1892 and others -- produced at the group's Japan factory -- were part of this change.

Today, Winchester Repeating Arms Company, as part of a greater business group, now has access to other top level factories and resources around the world. This works to the benefit of all of our customers. This gives us the ability to produce the best firearms possible with the value you expect from a Winchester -- all at the appropriate factory for the design requirements.

A quick way to know. There are no secrets regarding where Winchester firearms are manufactured.

Below is an overview of each firearm and where it is manufactured. This information is subject to change over time. Please, always check the barrel inscription to know exactly where a Winchester is made before you purchase it.

For a full accounting of manufacturing start dates for many Winchester firearms check out the Winchester Historic Timeline.

Check the Barrel First. We understand that the country of manufacture is very important to you and has been to many of our customers over the past 150 years. Currently, this information is found on the barrel inscription on all current Winchester rifles and shotguns. You will want to check this before you purchase a new Winchester to confirm where it was made. It is the primary source for country of origin information. Although subject to change, as of 2018, this is the breakout for current models:

Winchester Model 70.
It is no secret that Winchester Repeating Arms is part of the greater Herstal Group, with factories all around the world. The best factories are used for each model. Assembly and production of Model 70s have been shifted to our Viana, Portugal plant as indicated on the barrel inscription.  Earlier production of USA-made guns is marked as such. For the first seventy years, production was in New Haven, Connecticut, the factory that closed in 2006. After 2006, a number of Model 70 bolt action rifles were produced at a Herstal Group factory (FNM) in South Carolina, U.S.A. over several years.

Production was then moved to our factory in Viana, Portugal -- a factory which was already part of the Herstal Group (our parent company). Generally, today, key parts are likely sourced worldwide with the rifle made and assembled in Portugal.

The "Made in USA" question.
Some hunters and shooters have reasons for purchasing only Made In USA firearms. Some hunters only revere "Pre-64" Model 70s. We understand. But it would be incorrect to base your decision whether to buy a new Model 70 made at our Portugal plant due to a fear of poor performance. Model 70s made and/or assembled in Portugal have stellar quality, accuracy and overall performance that matches or exceeds any production Model 70s ever in our history. 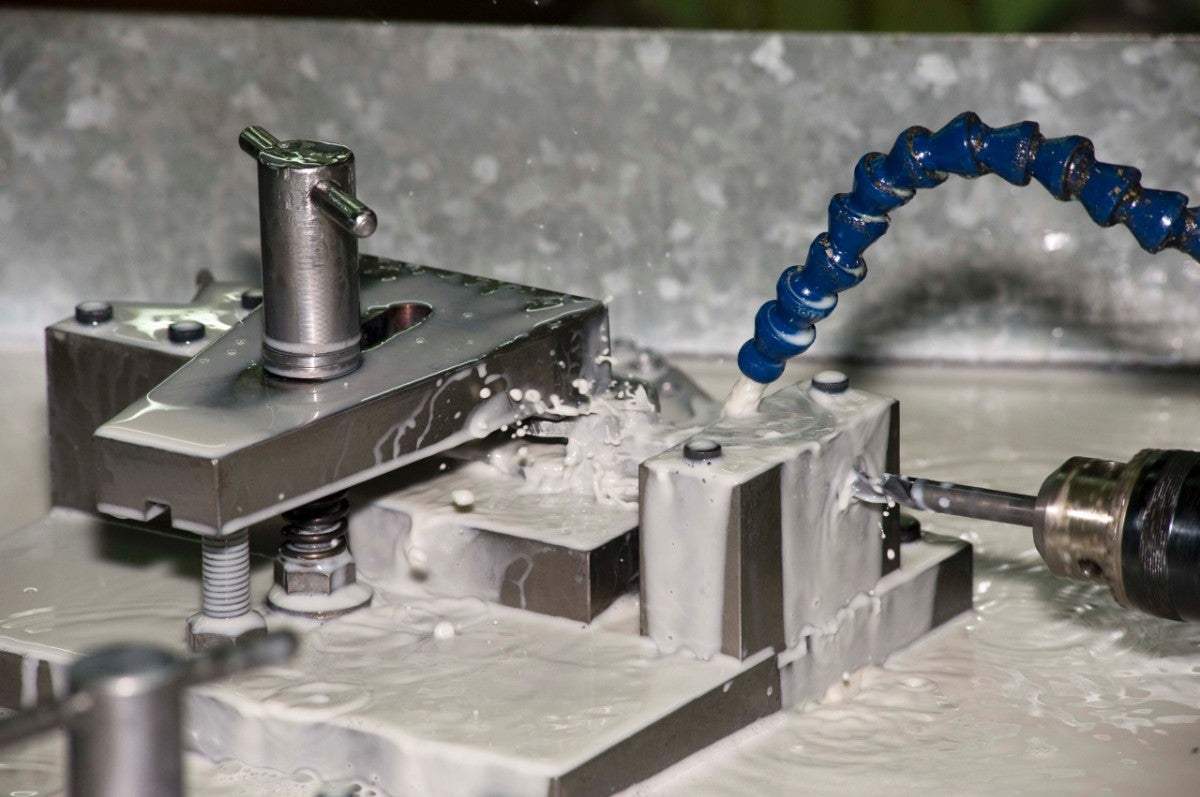 XPR Bolt Action Rifle.
After nearly eight decades Winchester has introduced a totally new bolt action rifle. It is accepted that Winchester is a world authority on bolt action design and on having the knowledge to create the designs and components needed for top accuracy and overall performance. The XPR is part of the great Winchester bolt action tradition of excellence. Production of XPRs is at our Viana, Portugal plant as indicated on the barrel inscription on the rifles. The Viana plant is one of the premier manufacturing facilities in the world and has a leading reputation for accuracy and precision. The XPR is new, but it already has a stellar reputation for its exceptional accuracy and steallar feature set.

Super X4 and Super X3 Autoloading Shotguns.
The Super X4 and Super X3 autoloaders are the latest in the line of shotguns having their roots in the original Super X Model One. Although mechanically the similarities are very vague compared to the original, the mystique remains. The Super X3, made in Belgium and assembled in Portugal, has acheived one of the finest reputations for any Winchester shotgun ever, especially among waterfowlers.Today's Super X4, made in Portugal, is an evolution of the Super X3 that takes this legacy a step further.

Super X Pump -- Pump Action Shotgun (SXP).
The SXP is a significant evolution of the exceptional Model 1300 Speed Pump. The Speed Pump established many speed and performance records over the years. The SXP is equally fast and incorporates new levels of quality and excellent value. Today's SXPs are designed and production is overseen by our R&D team in Morgan, Utah. They are then manufactured in our partner factory in Istanbul, Turkey. Istanbul is a key manufacturing and trade center for Europe. Some SXP parts may be sourced from our other Winchester group factories in Western Europe. SXPs are available in field models and Defender versions, and they are all assembled in the same factory. In an interesting bit of history, large numbers of Winchester Model 1866s were sold to the Turkish government in 1870 and Oliver Winchester himself, visited Constantinople (Istanbul) shortly thereafter to secure more sales of other firearms and ammunition.

Model 1894 (Model 94).
For well over 100 years the Model 94 was made at the New Haven, Connecticut factory. This all changed after the factory closing in 2006. The reintroduction of the historic Model 94 was spearheaded from our R&D facility in Utah. We then utilize our Winchester Repeating Arms sister factory in the mountain country near the city of Kochi, Japan for production. Although the Model 94 is the most recent historic Winchester to be built in this factory it is not the first. Since the mid-1990s all Winchester historic lever actions (formerly called Limited Editions) have been made at this same factory. This includes the rifles listed below.

Model 1866. The reintroduction of the Model 1866 lever action spearheaded our celebration of the 150th anniversary of Winchester Repeating Arms. It is the iconic Winchester and it is beautiful in every way. Manufacturing takes place at our facility in Japan. At the time of its reintroduction, It had not been in production since 1899. It was worth the wait. This rifle is not produced continually. At this time it is not in current production.

These "Historical Winchesters" are back in production today after being absent from the market for many decades. All were all dropped from production by the original Winchester company over half a century ago. Each of these models was reintroduced by today's Winchester Repeating Arms Company at some point beginning in the 1990s. All are in production today. All are made in our partner factory in Kochi, Japan.

"Made by Miroku - Japan - - Imported by BACO, Inc. - Morgan, Utah." All our Historic Lever Actions are made at our Miroku, Japan factory. BACO is our sister company used for importing Winchester firearms from our worldwide factories. The final ownership of the Winchester name is still in possession of the Olin Corporation.

Model 101 Over and Under.
The Model 101 is the evolution of a line of fine over and unders that started with the Supreme Series over a decade ago. It was designed and coordinated between our teams at the Utah facility and our R&D resources in Belgium and Portugal. It is designed and styled to have the same proven performance of the original Winchester 101s of half a century ago, but utilizes an exceptionally strong low profile lockup and is fitted with all the modern amenities required of a top performing over and under. In every way, today's Model 101s are exquisitely manufactured and show exceptional craftsmanship. All Winchester over and unders in recent years have been made in our partner factory in Belgium with additional assembly work done in our factory in Portugal. The "Made by FN Belgium" production location is inscribed on the barrel and these are the only production over and unders in the world that currently have the distinction of being made in Belgium.

The new Wildcat is assembled at our partner factory in Turkey with parts sourced worldwide. The inscription on the barrel always shows where a Winchester firearm is produced. This is the same factory the produces the Super X Pump (SXP).

The historic factory in New Haven, Connecticut, began a tradition of quality, innovation, and extreme, hard-working versatility that has become the Winchester hallmark. Production has evolved and moved over the years. Even though the factory closed in 2006 and production has moved worldwide for today's Winchesters, we still revere the history that surrounds the original factory. Shown are illustrations of the New Haven factory. First, the 19th Century factory in 1876.  At the bottom is an image of the factory at its height in the mid-20th Century. The factory grew massively as it provided production to defend the United States and other free-world countries in two World Wars. 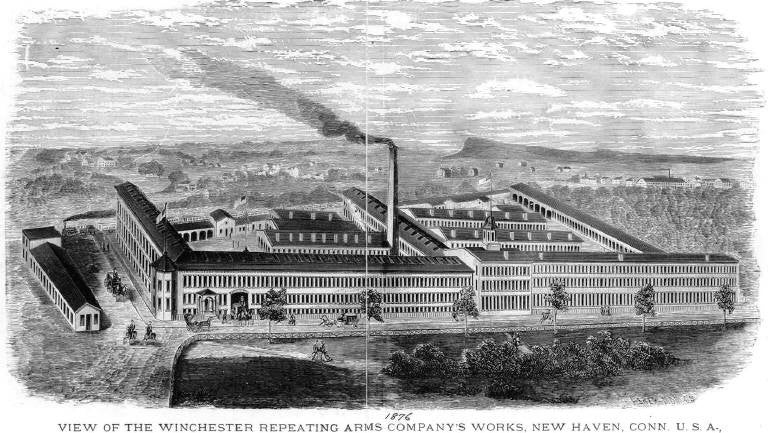 MORE INFORMATION ON THE NEW HAVEN PLANT CLOSURE IN 2006 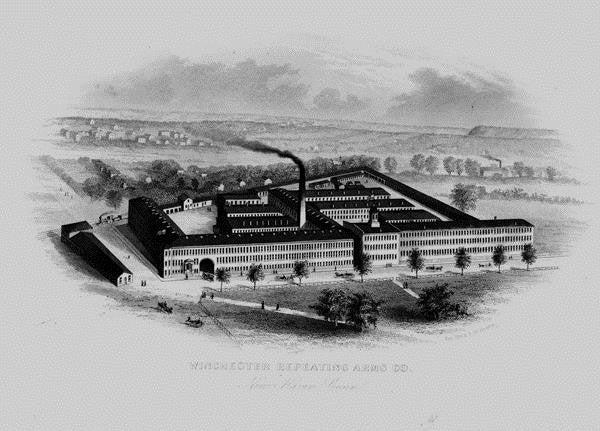 Updated August 2019. All information in this article is subject to revision as new details are learned. Places of manufacture may change over time. Always check the barrel inscription to confirm the place of manufacture for any Winchester firearm.