2017 marks the 125th year of the Model 1892. Of all the rifles produced in an era often called "the Winning of the West" the John Browning-designed Winchester Model 1892 stands out as an engineering masterpiece. Light, fast, ultra quick to the point, natural . . . . essentially perfect. Of all the pistol caliber rifles of the day, none have become more viable in modern Cowboy Action shooting than the '92. It's a good year to get your hands on some history.

The favorite of the Duke and just about everbody. "Fill your hands you . . . " The Model 92 was elevated to the status of movie star for three quarters of a Century by many of the most famous on-screen cowboys. When you saw a movie with John Wayne, or watched The Rifleman with Chuck Connors you knew that the rifle they used was more than a screen prop. Going back in time, Annie Oakley performed across the world with Buffalo Bill shooting her special smoothbore 1892.

Compact, light and fast. It is much like a compact or carbine model of the famous 1886 and has the same dual, vertical locking system for impressive strength. Many of its components have been scaled down and simplified to handle the smaller calibers, and here is where this nostalgic rifle shines. 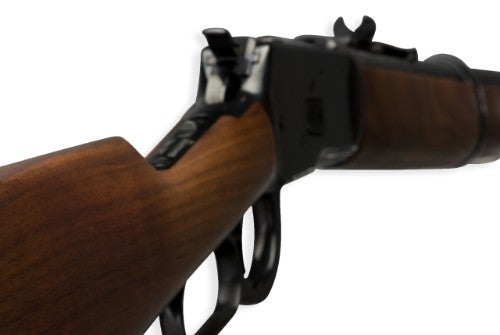 What makes it the ultimate lever action? The Model 92 is famous for its light weight, low recoil and responsive, easy handling. It displays a genius of design that makes it a modern-day treasure. The Winchester Model 1892 features a beautifully finished walnut stock, blued barrel and receiver, finely fit with precision and pride.

How to find the model you want. From year to year Winchester Repeating Arms introduces new models and versions of the Model 1892. Your dealer may have both the current model of the year and other previous year models in his or her inventory. An internet search is a key tool when locating these special rifles which are commonly made in very limited manufacturing runs.

One of the most famous Model 1892s of all. Annie Oakley's smoothbore.

The Model 1892 clearly was a major player in 19th Century history. But this one was one of the most famous of all. Annie Oakley used her special 1892 all across the world as she traveled with Buffalo Bill's Wild West Show. Watch this video taken at the 2017 SHOT Show.