150 Years of Winchester -- Collecting the Legend

As long as there have been beautiful Winchester guns there have been folks who want to add them to their collections. In 1875 Winchester Repeating Arms began to offer premium quality Model 1873 guns specially marked as “One of One Hundred” and “One of One Thousand.” The unique designation was dropped only three years later, making these guns among the most sought after by Winchester collectors.

Highly-decorated Winchester firearms have been popular with collectors since day one. Oliver Winchester personally presented many beautifully-engraved guns to influential persons, including President Abraham Lincoln and Secretary of War Edwin Stanton, along with numerous generals, kings, princes and potentates. These unique guns now command a king’s ransom on the collector’s market.

A devoted Winchester collector was industrialist and former president of Olin Corporation John Olin. In 1975 Olin began the transfer of thousands of firearms and millions of historic documents from the Winchester corporate archives to the Buffalo Bill Historic Center in Cody, Wyoming. Later, part of Mr. Olin’s personal gun collection was auctioned to provide funds to create the Winchester Museum Complex in Cody. The Cody Firearms Museum now houses one of the largest collections of firearms in the world and is open to the public year-round. You can learn more at www.centerofthewest.org. Some collectors choose to specialize in specific models or types of Winchester guns, or love the factory commemoratives or firearms with a unique story behind them. Still others collect rare Winchester-branded items like hand tools, knives, toys, rollerskates, sporting goods, flashlights and home appliances or Winchester promotional items like calendars, ads, posters and the like.

If you enjoy collecting, there’s something in the Wonderful World of Winchester that’s just right for you. The Winchester Arms Collectors Association is made up of thousands of members who are devoted to the preservation, understanding and collecting of Winchester firearms and related products as well as the role these products had in forging America’s heritage. Visit www.winchestercollector.org  to learn more. 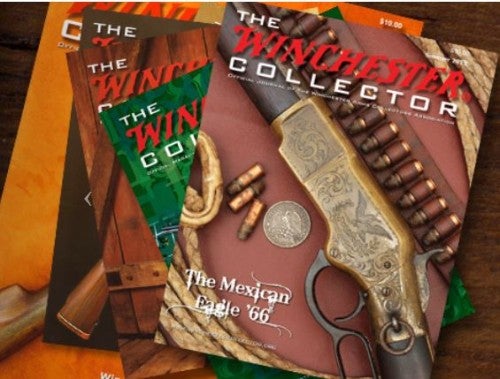 The Winchester Arms Collectors Association (WACA) is a not-for-profit, tax-exempt corporation with a worldwide membership of over 2,000 individuals. WACA was organized in July 1977, incorporated February 21, 1978 in the State of Montana and has been NRA affiliated (#G8143) since 1978. Our members are devoted to the preservation, understanding and collecting of Winchester firearms and related products as well as the role these products had in forging America’s heritage.

The Winchester Collector, a quarterly publication, is dedicated to the collecting of Winchester Firearms and related Memorabilia. It includes Winchester related articles, highlights from our shows and events, as well as calendar updates and classified ads. We encourage our members to contribute to our publications, as we showcase our members’ favorite Winchesters.

What year was my Winchester manufactured? Go to this Frequently asked Question for resources on dating your Winchester rifle or shotgun.