The Artist Behind the Iconic Winchester Horse and Rider

The noted illustrator Phillip R. Goodwin, shown in an early photo that was probably taken about the time of his encounter with the grizzly bear.

As we look back at the rich 150-year history of Winchester, the iconic Horse and Rider remains one of the most familiar images in the arms and ammunition industry. Having now been in use for nearly a century, this image is a timeless part of the outdoor landscape, like the mountains or the sky. But how did the Horse and Rider originally come to be?

In the March 2016 issue of the NRA American Rifleman, writer Christopher Yurkanin has crafted a colorful story on the origin of the rustic image, and the artist who created it, noted illustrator Phillip R. Goodwin. Yurkanin’s saga begins with a heart-stopping episode from Goodwin’s trip out West in the summer of 1911.

“(Goodwin) sat with a sketchbook on his lap, trying to capture the ethereality of the mountain scenery,” Yurkanin begins. “He was in the Canadian Rockies at the invitation of his friend (and fellow Western artist) Carl Rungius, a German who’d fallen in love with the North American West. Carl gave Philip the sage advice of an experienced outdoorsman: ‘As sure as you bring your paintbrush, bring your rifle, you’re bound to run into game on the day you don’t’.”

“Philip had forgotten his rifle,” continues Yurkanin. “But that didn’t occur to him until he saw the Grizzly come up from the river some 40 feet from him. They both stood at the same time. A short staring contest ensued before both turned tail and ran in opposite directions. The fortunate ending to this surprise meeting influenced a later series of paintings by Philip revolving around unexpected predicaments, several involving bears.” 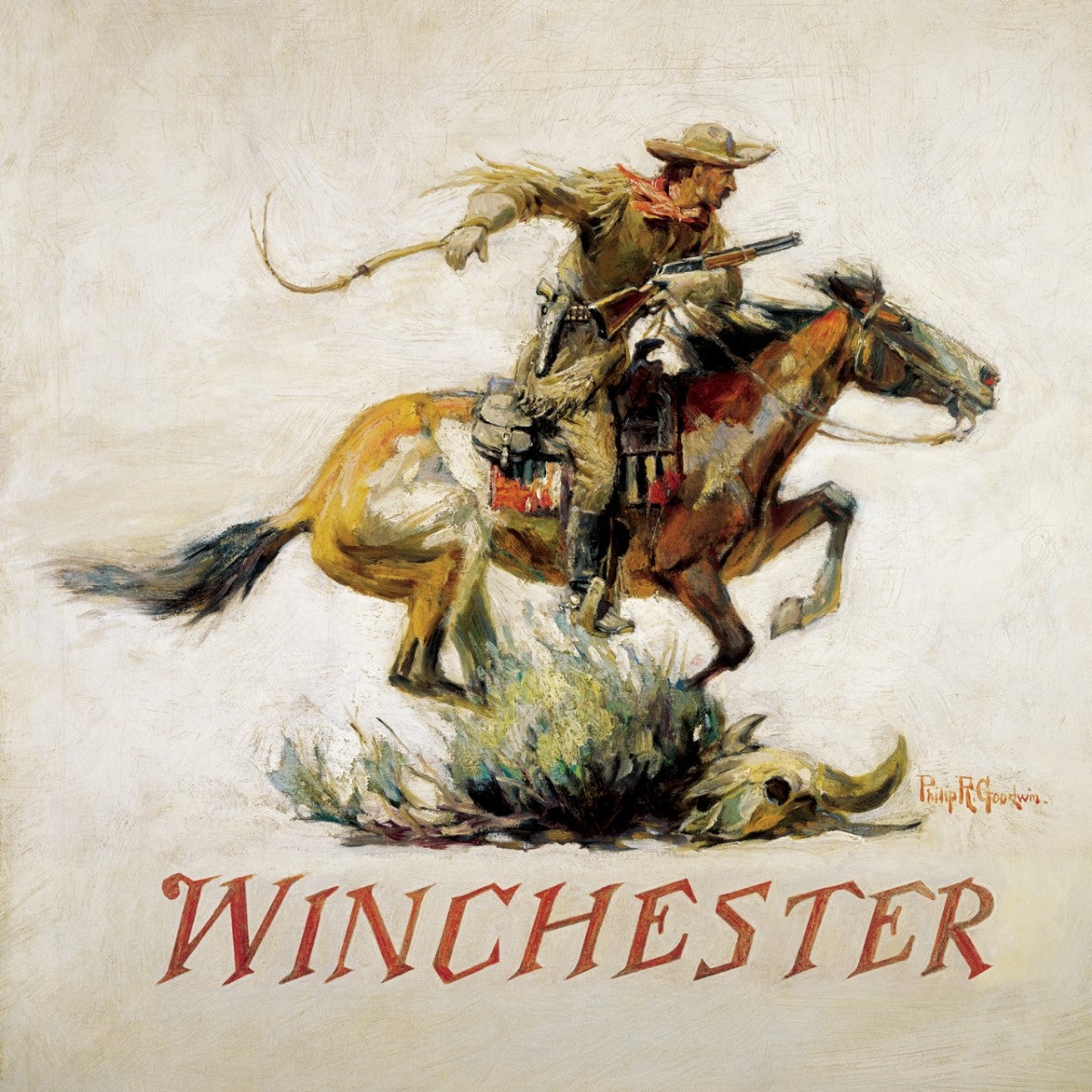 In 1919, as the world collectively recovered from the trauma of the Great War (now better known as WW I), Winchester Repeating Arms cast about for a new corporate image and it was Goodwin who brought the Horse and Rider to life.

“The Winchester Repeating Arms Company, which made the arms for the Allied armies that won the war, was also ready to refocus,” recounts Yurkanin. “In 1919, they sought after and found the perfect symbol of a hopeful and resilient American spirit in Philip Goodwin. His painting of the Horse and Rider, cradling a Winchester rifle, has lasted as the Winchester (and American) symbol ever since.”

You can read Yurkanin’s full article in the NRA American Rifleman.

Read an excellent article below, orginally published on the Winchester Ammunition website.

Goodwin was a contemporary and good friend of another noted of the American West, Charles M. Russell, who became a strong influence on his work. You can learn more about the fascinating life and work of Phillip R. Goodwin at  http://www.tfaoi.com/aa/6aa/6aa209.htm

If you are interested in seeing some of his great work illustrating the American West and the outdoor lifestyle simply do a good search for Phillip R. Goodwin. You will not believe what you see.

As an interesting historical side-note, while Phillip R. Goodwin first rendered the Horse and Rider back in 1919, it wasn’t until 1965 that Winchester finally got around to registering it as an official corporate trademark. It was worth the wait. 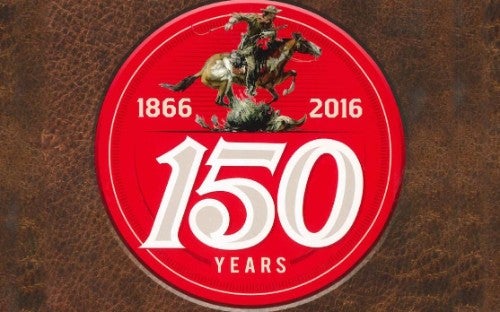 The Artist Who Designed the Winchester Trademark Horse and Rider

From the Winchester Ammunition Website -- Compiled By Jennifer Houze

Think of the great Western artists of the early 20th century, and who comes to mind? Certainly, Frederick Remington, Charles M. Russell and Philip R. Goodwin. Philip R. Goodwin? Not many people today are familiar with Goodwin, but he was one of the premier Western artists during the first three decades of the 1900s. And while he is often overlooked in favor of his contemporaries, Goodwin achieved fame and respect in his profession during his lifetime and became one of the most accomplished artists of his generation.

Although his works are recognized throughout the firearms and art worlds, we don't know much about Philip Goodwin, the man. Perhaps this is because he shied away from the limelight, preferring a quiet life instead. Very little information exists concerning his personal life, and the small amount that we do know is attributable to Goodwin's sister-in-law, Neva T. Goodwin (the wife of his brother Ray). Among the items that she donated to the Buffalo Bill Historical Center in Cody, Wyoming, are letters Goodwin wrote to his mother from Charles Russell's lodge in Montana, as well as letters to Goodwin from Russell. From these documents we get a brief glimpse at his personality.

Born in Norwich, Connecticut, on September 16, 1881, Goodwin was the youngest surviving child of his parents, John B. and Ella Willoughby Raymond Goodwin. Although his brother Ray was four years older, they were close companions. But Goodwin's interests were in art, while his brother's lay elsewhere, and they eventually went their separate ways. Goodwin began sketching at a very early age, and by the time he was eleven, his first illustrations were already being published in Collier's.

Pyle, "America's foremost illustrator" (as he has been called by art historian Walt Reed), took Goodwin under his wing when the young man was just nineteen. Along with some of Pyle's other students, such as N.C. Wyeth, Thornton Oakley and Frank Schoonover, Goodwin thrived. He took what his teacher said to heart, and the atmosphere and spatial qualities with which Goodwin learned to paint would, in turn, be taught by Goodwin to someone else.

After Goodwin finished his studies with Pyle, he went to New York City, where he established a studio. It was in New York that he met Charles M. Russell, one of the West's great painters. Russell and Goodwin went on to become great friends, despite their seventeen-year age difference. Russell, the senior of the two, had a lodge in Montana that Goodwin frequently visited. In a letter to his mother, Goodwin wrote, "It is one of the prettiest spots I have ever seen here on the lake with the Giant Rockies surrounding it. It is all big forests around the lake here though and I expect to do lots of sketching."

During Goodwin's visits with Russell, the two would camp, fish and sketch. It was during this time that Goodwin taught Russell how to bring atmosphere and space into his paintings. "Russell didn't paint outside until he started painting with Goodwin," said the late Western artist John Clymer. "And before he started painting with Goodwin, there was no atmosphere in his work-brown leaves he painted brown, blue skies were blue, red coasts were red. Then all of a sudden you started seeing air in his paintings and distance. That was the result of the things he learned from Goodwin who, in turn, had learned them from Pyle" (Quote taken from Wilkinson, Todd. "Why Philip R. Goodwin?" Wildlife Art News, May/June 1991.) It was on one of his trips to Montana that Goodwin painted "Hunters with Dog", which depicts Goodwin, Russell and Goodwin's dog, Jock, who was Goodwin's constant companion.

But Russell wasn't the only person with whom Goodwin went out West. Goodwin also became good friends with Carl Rungius, whose studio in New York was fairly close to his own. They spent six weeks in the Canadian backwoods for the purpose of sketching, during which time Goodwin was working on big game subjects for firearms calendars and posters.

Goodwin's work for firearms calendars and posters is best termed "predicament painting," in which the subject often finds himself in an unanticipated situation. Take, for instance, "Unwelcome Visitor", in which a hunter rounding a corner finds himself confronted by a bear exiting a cabin. Ironically, Goodwin once found himself in a somewhat similar situation. During one of his sketching outings, he saw, out of the corner of his eye, a grizzly bear. Although he had been told by Rungius to always have his rifle with him, this time he didn't. The bear was just as surprised as Goodwin and, fortunately, lumbered away after a few minutes.

Goodwin never married. He lived with his mother and was fiercely loyal to her. Upon her death in 1924, he grew very lonely-a feeling that was further compounded by the death of his friend Charlie Russell, in 1926. By 1935, Goodwin had decided to leave New York for the sunny state of California, where his bother and sister-in-law lived. He was finalizing plans to leave when he was stricken with pneumonia and died.

Goodwin's aptitude for painting animals earned him commissions for illustrating books in addition to advertisements. Among the books that he illustrated are: Cardigan by Robert W. Chambers, The Call of the Wild by Jack London and Silent Places by Stewart Edward White. Goodwin's work for Theodore Roosevelt's African Game Trails was most remarkable since he never went on the expedition and worked only from Roosevelt's descriptions of how the animals looked.

Like many other artists of the time, Goodwin earned a living illustrating for firearms companies. He worked for Remington, Peters Cartridge Company, Marlin and Winchester among others. It was for Winchester that Goodwin was most prolific. He was, in fact, the most productive of all Winchester artists. In total, he executed three calendar scenes, seven poster vignettes, as well as a few scenes for stationary, cardboard pop-ups and line types. But he is most famous for his "Horse and Rider" trademark, which he designed in 1919, and it still endures today.

This story appears by the Winchester Ammunition website and is used with permission.  http://www.winchester.com/companyinfo/history/pages/history-of-trademark.aspx

Many Winchesters, including the iconic Model 1866 Anniversary models, have used the horse and rider motif. Today it is as strong a representation of the Winchester brand as the word Winchester itself.