Whenever gun people get together over a cup of coffee, the conversation often turns to historic guns and their value. After the recent bidding at Rock Island Auction Company, these folks will have plenty to talk about for a long time to come.

Aside from being the most expensive firearm ever sold at auction, the things that make this Model 1886 Winchester lever-action something special in that it bears serial number 1, and it was presented to then Captain Henry Ware Lawton by one of his fellow officers, Lt. George E. Albee. Both men had won the Medal of Honor in the Civil War, and both took part in the pursuit of the renegade Apache leader Geronimo. The grueling chase finally ended the Sierra Madre Mountains of Mexico with Capt. Lawton orchestrating the surrender of the chief and his band.

Along with his service in the Civil War and Indian Wars, Henry Ware Lawton also fought in the Spanish-American War and the Philippine-American War. He attained the rank of Major General and was killed in action in 1899 at the Battle of San Mateo in the Philippines. He is buried at Arlington National Cemetery. 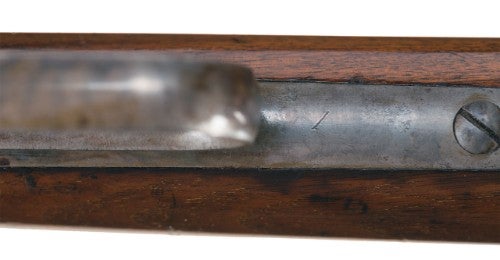 The Model 1886 rifle was designed by inventor John M. Browning and was able to handle the most powerful black-powder cartridges of the period. Capt. Lawton’s Model 1866 rifle is graded as being in 95% condition and is chambered for the 45-70 Govt. cartridge. It has a blued barrel, a case colored receiver and lever and a smooth walnut stock.

“It represents the 25 years of bloodshed between the U.S. Army and the Apache Indians in the Southwest, and the end of the Indian Wars. Being serial number one and possessing such outstanding condition would alone be enough to draw six figures at auction. When you add one of the most famous names in the history of the Old West you have a huge crossover appeal”, said RIAC President Kevin Hogan.

One of the few known photos of Geronimo, taken in 1887. "The Geronimo Rifle" is not Geronimo's actual rifle. It was a Winchester 1886 rifle presented to his capturer, Captain Henry Ware Lawton. This is a rifle with a great history . . . the rifle is serial number 1 of all 1886 rifles ever made. RIA photo.

READ THE FULL STORY ON THE ROCK ISLAND AUCTION SITE. The Rock Island Auction Company has thoughtfully posted a well-researched historical feature by Joel R. Kolander on their website. It’s well worth a close read and the seldom-seen vintage photos of the U.S. Army’s pursuit of Geronimo are absolutely fascinating.

Most expensive ever. The "Geronimo Rifle" is now considered the most expensive gun ever sell at auction. Acording to the Rock Island Auction website, "The 1886 Winchester in lot 1025, serial number 1, presented to the man who captured Geronimo, found itself in a titanic tug-of-war. The $500,000 low estimate was the second highest of the auction, so expectations were high, but expectation began to give way to astonishment as the bids crept higher and higher. Cheers erupted when the bids crossed the one million dollar mark, and those in attendance wouldn’t have to wait much longer for the gun to arrive at its final price, a realized total of $1.265 million – the new world record for a single firearm sold at auction."