Guns & Ammo is “4thcomming” in their praise of the new Winchester Super X4. 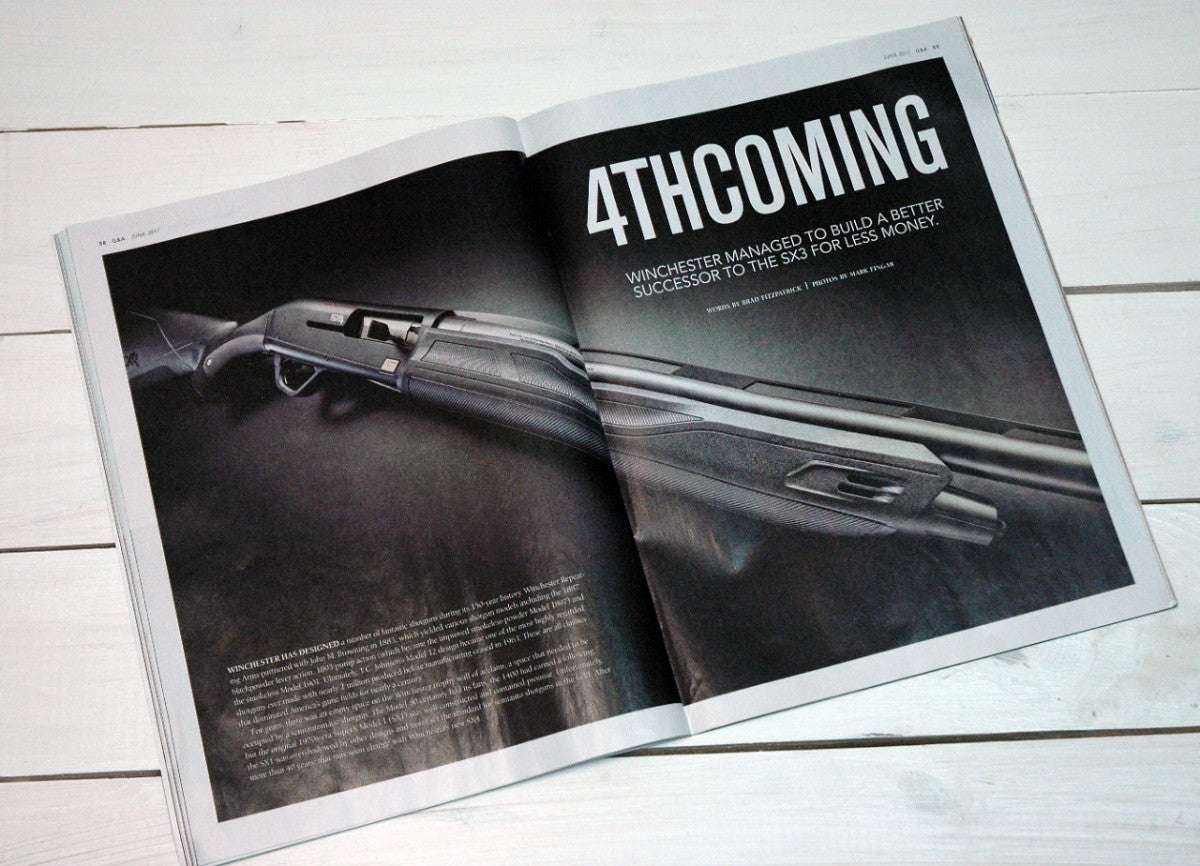 Renowned gun magazine calls the Super X4 a “…better successor to the SX3 for less money.”

One of the world’s best-known gun magazines has to be Guns & Ammo. Ever since the magazine was founded back in the late 1950s, G&A has developed a reputation for objective and entertaining firearm journalism.

In the June 2017 issue of G&A, the well-known gunwriter Brad Fitzpatrick gave readers a detailed overview of the Super X4 autoloading shotgun from Winchester Repeating Arms. And, frankly, he sees the SX4 as potentially setting the new standard for semiauto shotguns. Let’s see why Fitzpatrick is so “4thcomming” about the Super X4.

Fitzpatrick sees the SX4 as potentially setting the new standard for semiauto shotguns.

“It’s been 10 years, but Winchester is now ready to launch the next generation of (SX4).

“…The SX4 benefits from several improvements on an already good design…”

“…I have to admit the SX4 benefits from several improvements on an already good design (the SX3), and Winchester further lowered the price to make it more affordable,” reports Fitzpatrick.  “Note that I didn’t say cheaper…. the main theme of the SX4 is that Winchester has worked to find ways to make its flagship semiauto shotgun line better while reducing costs.”

Fitzpatrick goes into great detail recounting the SX4’s improvements, including an enlarged polymer trigger guard that allows easier access for gloved fingers. He also cites the improved, larger footprint recoil pad, the stock’s enhanced ergonomics, and the upgraded bolt handle, bolt release and safety. In addition, he notes the upgraded nickel Teflon™ coating on the bolt body, bolt release and carrier help slick up the operation on the Super X’s already slick-shooting design.

While some features have been improved, others remain in this classic design. They include the gun’s fine, smooth-swinging balance, the chrome-lined barre; with Invector-Plus choke tubes, drop-out trigger assembly and the hyper versatile and relentlessly reliable gas system. As Glenn Hatt, Winchester’s firearm product manager observes, it’s a simple system that simply runs.

But Fitzpatrick’s review certainly wasn’t limited to a static poking around in the Super X4’s feature set. He decided to take the Super X4 on a demanding fall waterfowl hunt near Winnipeg, Manitoba, and really wring it out.

“Birds were plentiful and limits were high, as were G&A’s expectations of Winchester’s SX4,” Fitzpatrick recalls, “The weather got progressively worse over the course of three days, with ice, sleet and mixed snow…The (SX4’s) nickel Teflon™ coating on components, chrome lined bore and tough-as-nails gas system exceeded expectations…. The SX4 was still cycling perfectly, helping us clear out Manitoba’s sky.”

Fitzpatrick’s takeaways on the G&A test were that he liked the Super X4 a lot, that it was one of the softest recoiling 12-gauge shotguns on the market, and finally that the larger operating controls were a welcome addition.

“Will the SX4 be Winchester’s newest legend?” Fitzpatrick asked in conclusion. “Time will tell, but there’s no doubt that this gun is worthy of its branding.”

You can pick up a copy of the June 2017 issue of Guns & Ammo at your local newsstand, or subscribe online at gunsandammo.com

Stop by your local Winchester Repeating Arms dealer and handle the new Super X4 for yourself. Like the guys at G&A, we think you’ll find this great new autoloading shotgun very “4thcoming.”

You can also see the SX4 in action here http://www.winchesterguns.com/products/shotguns/super-x4.html