Many of us dream of owning a magnificent and pristine specimen of the Winchester Model 1873 lever-action, “The Gun that Won the West.” However, unless you’re the firearms curator of the Smithsonian or have mile-deep pockets, an original Model 1873 in such condition is probably beyond the reach of the average Winchester buff.

Enter the new Winchester Model 1873 as offered by Navy Arms, and as you can see, it’s a beauty. In the quarterly Winter/Spring 2016 issue of GUNSLINGERS Magazine, writer Steven Barlow put one through its paces. First, let’s explore a few important features and details of this unique rifle. Val Forgett II, the head honcho at Navy Arms takes a new, in-the-white Winchester Model 1873 fresh from the Miroku factory then has one of several outside gunsmiths add a traditional color case hardening finish. The depth and pattern that results is simply breathtaking. 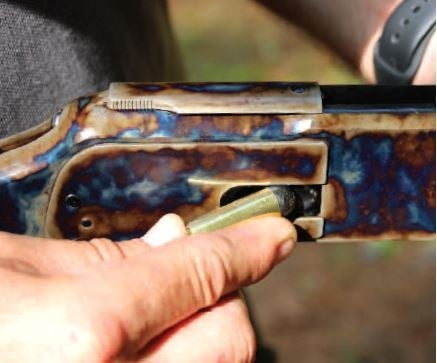 Close-up of the Navy Arms 1873. This is an authentic Winchester 1873 that has been specially embellished and finished by Navy Arms. 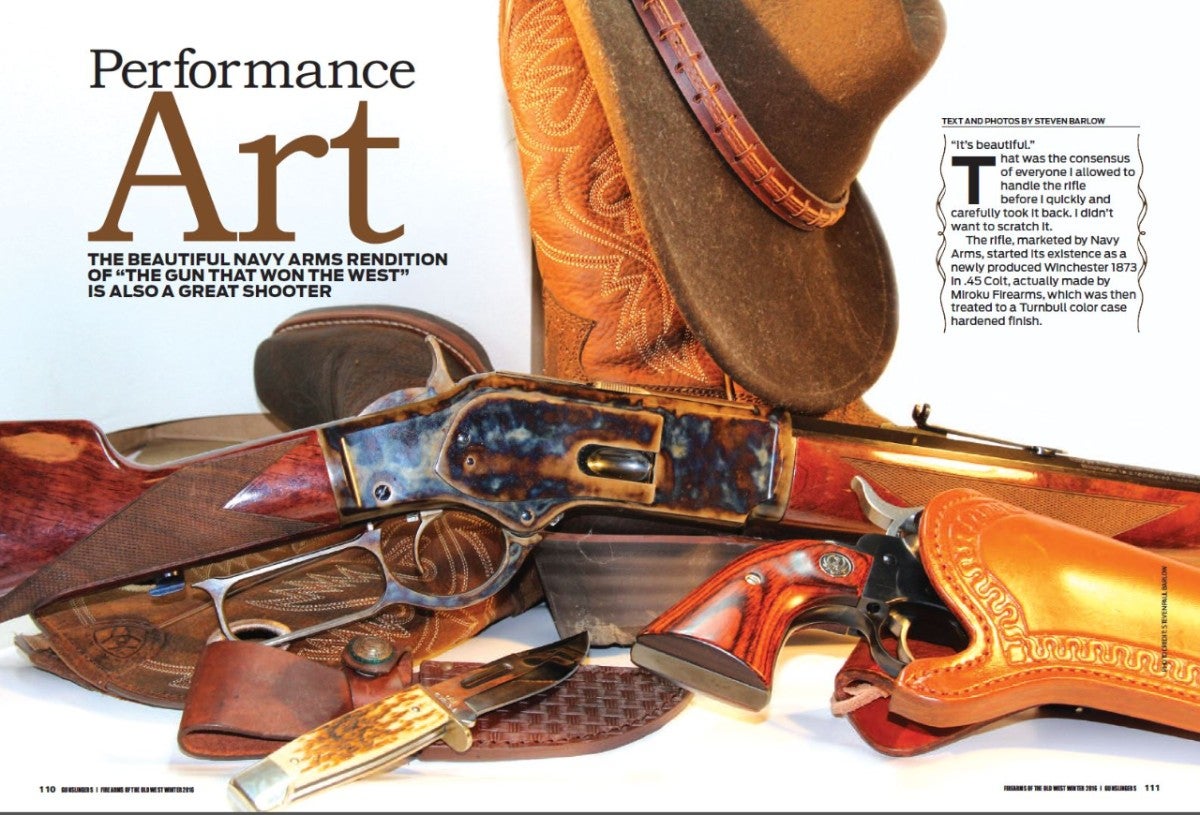 To read the entire article go to Gunslingers Magazine.

The wood on the Navy Arms offering of the Winchester Model 1873 is nicely-figured deluxe American Walnut with full cut-checkering and tinted in the deep, traditional Winchester Red finish. A case-colored forearm cap and steel shotgun-style butt plate complete the rifle’s furniture.

The blued barrel has the traditional full octagon shape, and can be had in either a 20” or 24¼” length with a full-length magazine tube. Current chamberings are your choice of 45 Long Colt or 357 Magnum. A Marble’s Arms semi-buckhorn rear sight and gold bead front sight are easy to see in any light and help keep your shots right on target. A short-stroke lever kit is installed to speed things along for those in the SASS Cowboy Action crowd.

“ ‘It’s beautiful,’ was my exact thought when I did fire it for the first time,” opined writer Steven Barlow in his GUNSLINGERS review. “The gun shoots like a dream. It comes to the shoulder effortlessly and points naturally. Because it fires a pistol cartridge, it has very mild recoil, which makes shooting it a very pleasant experience.”

“…Quick to transition from target to target…”

“Its fast-handling qualities that helped to make it popular in the Old West were immediately evident,” recounted Barlow. “It was quick to transition from target to target, which would have helped the cowboy fending off a band of rustlers or the outnumbered lawman tracking a gang of outlaws. Those things go through your mind when you shoot a gun like this.”

“The action on this Navy Arms gun was smooth; there were no rough spots whatsoever,” Barlow continued. “Keep in mind, though, that lever action rifles, like pump action shotguns, work best when you don’t baby the actions. Work the lever completely with authority and you will have no problems.”

“I understand how this Navy Arms Model 1873 would be attractive to those involved in SASS cowboy action shooting events,” observed Barlow. “Those shooters, in their reproduction Sunday-go-to-meeting best, would feel proud to be carrying this rifle into competition.”

“…Perfect (for)…those who have reached a stage where they have earned a right to some of the finer things in life.”

“But I don’t see this as a weekend-only rifle,’” Barlow concluded. “I see it also as a perfect moderate-range hunting rifle to be carried by those who have reached a stage where they have earned a right to some of the finer things in life. To be able to daydream about how this gun was used in the Old West is just a bonus. I would like to take this into the woods this fall. Beauty is in the eye of the beholder, it’s true. And I’d like to be holding this beauty and use it for its originally designed purpose: to shoot it. And that would be a beautiful thing.”

You can also learn more about the beautiful new Navy Arms edition of the Winchester Model 1873 at navyarms.com

At this point we think you’ll want to read the entire article by Steven Barlow in GUNSLINGERS Magazine, available at your local newsstand, or you can subscribe online by CLICKING HERE. 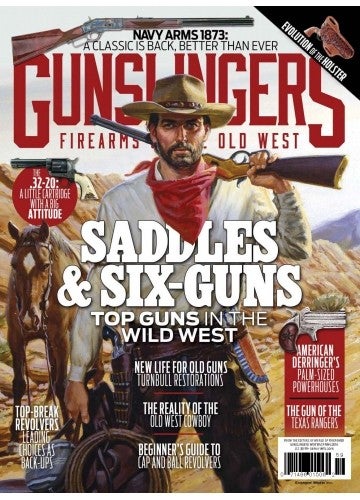