Don't wait another 100 years for a rifle this collectible.

THE 100TH ANNIVERSARY JOHN WAYNE COMMEMORATIVE IS NO LONGER IN PRODUCTION. THE FOLLOWING IS FOR HISTORICAL PURPOSES.

Every 100 years or so a gun comes along that is so collectible and so incredibly beautiful that it becomes an heirloom even before it is produced.  So it is with this series of very special Winchester rifles. We are referring, of course, to the 100th Anniversary John Wayne Model 92 Winchester carbines! A series created to honor the anniversary of John Wayne's birth -- May 26, 1907. For many of us, John Wayne has become an icon of rugged, American individualism and the adventure of the great westward expansion.

With the help of the John Wayne family, the Winchester team created an authentic rifle that honors the man, his legend and the style of rifle that he used in so many of his films. The rifle was, of course, a Winchester Model 92 with a special large loop lever, a special 19" barrel and classic carbine styling. Added to this is a beautiful gray nitride receiver and lever along with a forged medallion honoring John Wayne, inletted in the stock. 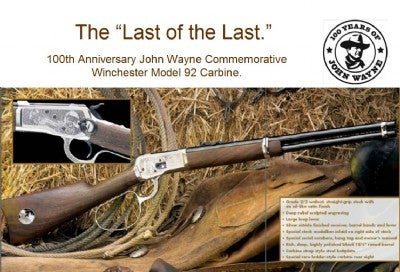 The first of this edition began arriving later in 2007 and the last guns have now arrived from the Winchester factory and are ready to ship to our customers. As with many special limited editions produced by Winchester -- from the highly finished series of the 1800s, to the custom shop guns of the late 1900s, until now --  these are are outstanding, highly engraved rifles with exceptional walnut and with a level of quality that was done carefully and precisely.

These are certainly the "Last of the Last" of this series of rifles. Not only are they the last group to arrive from the factory but they are the last chance to ever own one of these special rifles.

The package is complete: In addition to the rifle, you receive a special full color box sleeve, special John Wayne owner's manual, a special historic brochure on your gun, a beautiful inletted medallion, 44-40 chambering (just like the original) and a classic ladder style rear sight (also just like the original), all included with each rifle. 100 years from now, on John Wayne's 200th Anniversary, it is safe to say that most, if not all, of these rifles will be in mint condition, just as they are today. They will be handed down from generation to generation, still honoring John Wayne and honoring those who purchased one and made it part of their family tradition.

We understand that many John Wayne enthusiasts have been waiting patiently for the arrival of these rifles . . . for some time now. You may have given up hope. But we assure you they have arrived and  it was well worth the wait.

To purchase your John Wayne Model 92 Winchester you will need to contact a Winchester Repeating Arms dealer near you and ask them to order you one immediately. Your dealer will be able to give you information about your order and an expected delivery date once the order is placed.

A letter written to the NRA detailing the rifles when they were first introduced and two guns were provided for fundraising purposes.

It is with pleasure that Winchester Repeating Arms presents these two very special Winchesters.

These particular two rifles are unique among an entire generation of special edition rifles.

The Man. John Wayne is an icon of rugged, American individualism and is the embodiment of the adventure of the great westward expansion. Wayne has been the focus of a several special Winchester commemorative rifles, several pistols and a collection of other memorabilia over the years. Perhaps no film personality is regarded more highly among those who enjoy guns and Western films than John Wayne. 2007 marked Wayne’s 100th birthday. “The Duke®” made more than 175 movies in his illustrious career. In his westerns, he was rarely without his favorite rifle — the timeless Winchester® Model 92 lever action carbine.

The Rifles. Every 100 years or so a gun comes along that is so collectible and so incredibly beautiful that it becomes an heirloom even before it is produced. So it is with this series of very special Winchester rifles. With the full cooperation and endorsement of the John Wayne family and a consulting a team of historic gun experts, Winchester created an authentic rifle that honors the man, his legend and his love for a very unique style of rifle that he used in so many of his films. Patterned after the rifles he commissioned early in his film career, they are, of course, Winchester Model 92s in 44-40 caliber. Each has a special large loop lever, 19" barrel and classic carbine styling. Added to this is a beautiful gray nitride receiver (High Grade) or high polish blued (Custom Grade), matching levers and forged medallions inletted in the stock. The strap style buttplate and ladder style carbine rear sight complete the authentic setup. Each has exceptional high grade walnut and with a level of quality at the top of the gunmaking craft.

The Reason. So what makes these two guns so special? After two years in development, the John Wayne anniversary rifles were first exhibited at the 2007 SHOT Show using rough, only partially functional prototypes. The best was yet to come, in May of 2007, the first rifle of each series arrived from the factory in the final configurations for final approval before production could begin. Every detail – including total functionality – was now in place. Every component and feature exhibited extreme precision and beauty. Approval was given by Winchester Repeating Arms to proceed with production.

In addition to the rifle a special full color box sleeve, special John Wayne owners manual, special historic brochure and a custom leather luggage case completes the package. 100 years from now, on John Wayne's 200th Anniversary, it is safe to say that these will be the most cherished of all . . . because these two were the first.