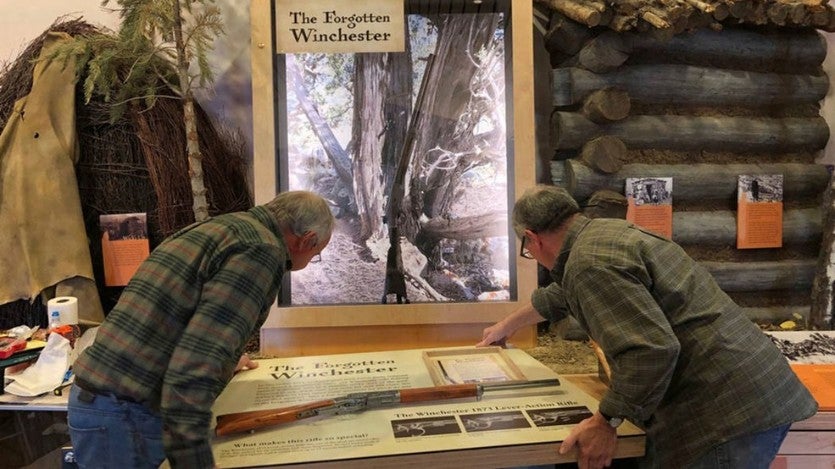 The "Forgotten Winchester" has a new home. The Winchester Model 1873 rifle found by National Park Service employees in 2014 has created a great deal of intrigue over the past few years. It was determined that the rifle itself had been purchased new in 1882. The original owner of the rifle or why it was left leaning against a tree in what is now the park, have never been determined.

After a trip through the Cody Firearms Museum's restoration department -- where it was stabilized and inspected -- the rifle has finally returned to the park as the centerpiece of a main display on the rifle.

Now there is one more good reason to swing off the normal tourist paths in southern Utah or on your way to Yellowstone, to visit an amazing park and see the rifle that has been the focus of speculation for so many people since it was found. Perhaps the "why, who and when" will never be known, but just looking at this weathered Winchester sends one's thinking into the past, speculating on the adventure or tragedy that lead to its being leaned against a slow-growing juniper tree in the deserts of Eastern Nevada. 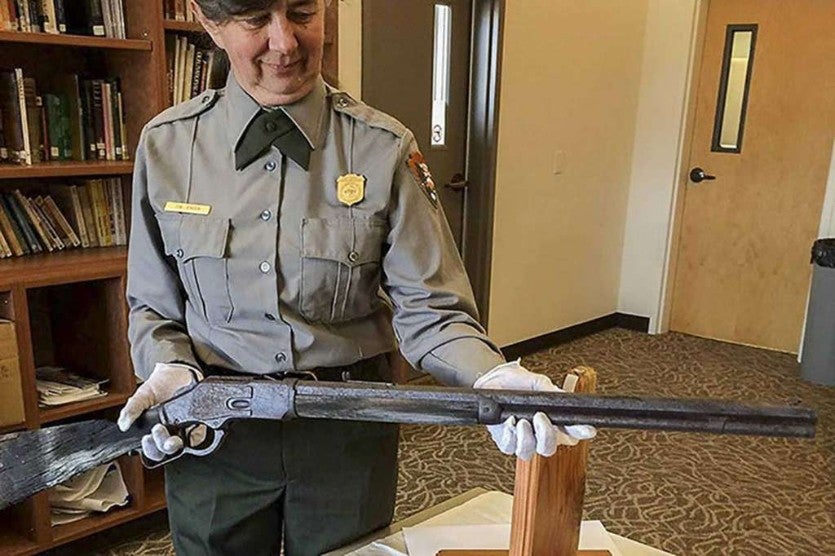 Shown is the "Forgotten Winchester," a Model 1873 sold in 1882. The rifle is held by Eva Jensen, a wonderful friend of Winchester Repeating Arms and a National Park Service employee.

At the time this particular Winchester 1873 was made, it was the top choice for ranchers, farmers, settlers, pioneers, hunters, miners, and adventurers of the wild and largely untamed American West. It was only in 1869 that the transcontinental railroad was completed a few hundred miles north near Ogden, Utah. And at the time this rifle was sold and making it's way to Eastern Nevada in 1882, the area was virtually wilderness, populated only by scattered pioneer settlements and large, unfenced ranches. Utah, just to the East was still a territory, not a state. Some of Nevada's largest mining strikes had already occurred but scattered claims were still being made, even in the foothills of what is now Great Basin National Park.

The rifle was found in the foothills of the southern portion of the Snake Range, in the shadow of Wheeler Peak (13,064 feet,  7,562 meters).  The range has four of the five highest mountains in Nevada, all over 12,000 feet. This is rough country and the rifle was likely owned by a seasoned outdoorsman. But why it was left is likely never to be known. 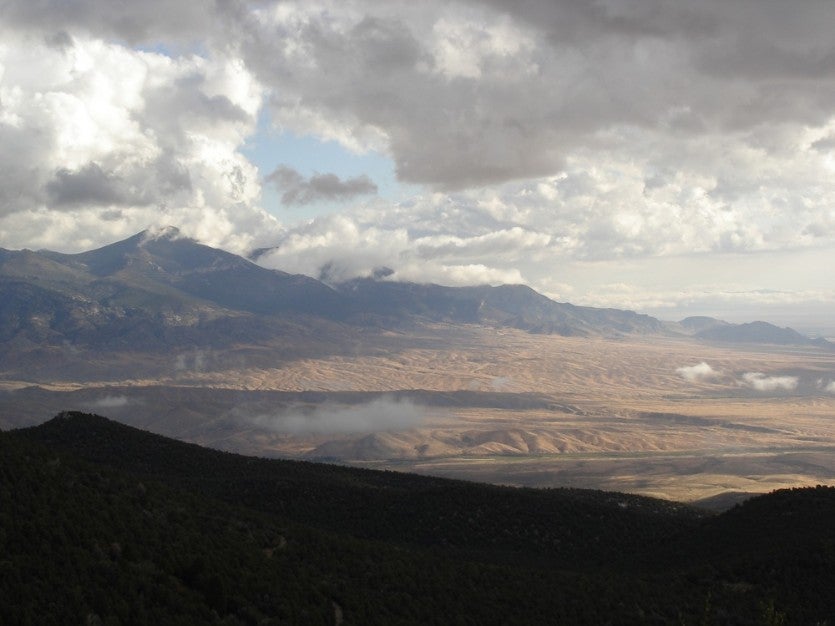 The basin and range mountains of Nevada and Utah have long been habitat for the native Mule Deer, which would have been a good reason for the owner of the rifle to venture into the foothills. Perhaps he was caught in an early snowstorm and leaned his gun against the tree to dress his kill and pack it on his horse, and in the confusion of the storm forgot his rifle. But now I am speculating . . . and having some fun. Just like you should do on your way to Great Basin National Park this summer..

Learn more about when the "Forgotten Winchester" came to the Winchester Repeating Arms headquarters in Utah.

The “Lost Model 1873” Pays a Visit to Winchester Repeating Arms

Many fans of the Winchester brand were excited as they followed news of the discovery by National Park Service archeologists in late 2014 of a weather-beaten and rusted Model 1873 lever-action rifle leaning against a gnarled juniper tree in the backcountry of the Great Basin National Park in eastern Nevada.

Scientist Eva Jensen discovered the relic during a survey of potential archeological sites in the park’s Snake Mountains. Since then the mysterious gun has become well traveled to places like the Cody Firearms Museum and the 2016 SHOT Show in Las Vegas. It would seem the rusty rifle has taken on a life of its own since the discovery.

According to the best available historic records, the 134-year old rifle was made in 1882 by Winchester Repeating Arms at the original factory in New Haven, CT. Where it travelled over all the intervening years until an unknown someone left it on a south-facing hillside in Nevada’s high desert remains a mystery, but the gun’s latest stop on its remarkable journey completes the circle as it paid a visit to the current home of Winchester Repeating Arms in Morgan, Utah. 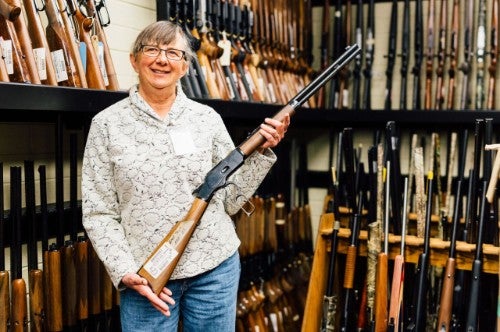 NPS archeologist Eva Jensen examines a current production Model 1873 rifle in our gun library. It is similar to the one she found in 2014 in Great Basin National Park. Winchester Repeating Arms photo.

The rifle on display. Although essentially "stabilized," it still requires very, very careful handling. We understand it will be on display at Great Basin National Park sometime this summer. 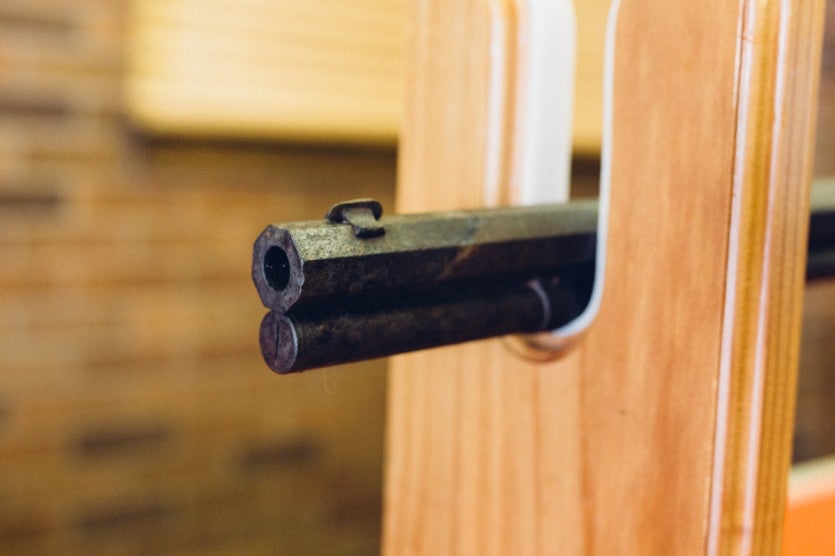 In cooperation with the NPS, Ms. Jensen and her colleague Greg Seymour brought the rustic rifle to the Winchester Repeating Arms headquarters in Utah. While there the pair got a tour of the firm’s gun library, talked to Winchester engineers and technicians and even got to shoot a couple of current production Model 1873s, including one of the magnificently engraved 150th Anniversary edition guns.

Ms. Jensen was pleased to share the story of her discovery with our website’s readers. “My goal as an archeologist is to find the whole pot so to say,” began Jensen. “It was just after our lunch break one day in late November. Our survey area was a steep, rocky outcrop and I was looking for Native American pottery and artifacts under some rocky ledges, because you never know what you’ll find there.”

“I went around a tree and saw something mechanical under it, which was the gun’s lever,” Jensen recounted. “It took a moment for my brain to process what I was looking at, and I was literally speechless. Then I urgently called for the rest of the survey crew to join me, and from the tone of my voice several of them thought I’d fallen off a cliff! When they saw the gun the survey crew members were dumbstruck.”

“We were able to take some photos in the fading afternoon light, and our technician was able to capture the ‘Model 1873’ lettering engraved on the tang,” continued Jensen. “Because it was found in a remote area, we left the gun in place until we could do some initial research. We showed photos of the gun to more colleagues and the consensus was it was an original Winchester.”

Jensen started learning about the Winchester Model 1873 and found it was the ‘everyman’s gun’ of the era from her research at the Cody Firearms Museum. Glen Jensen (no relation), the recently-retired historian for Winchester Repeating Arms also lent a hand, explaining that some of the gun’s critical internal parts were missing. 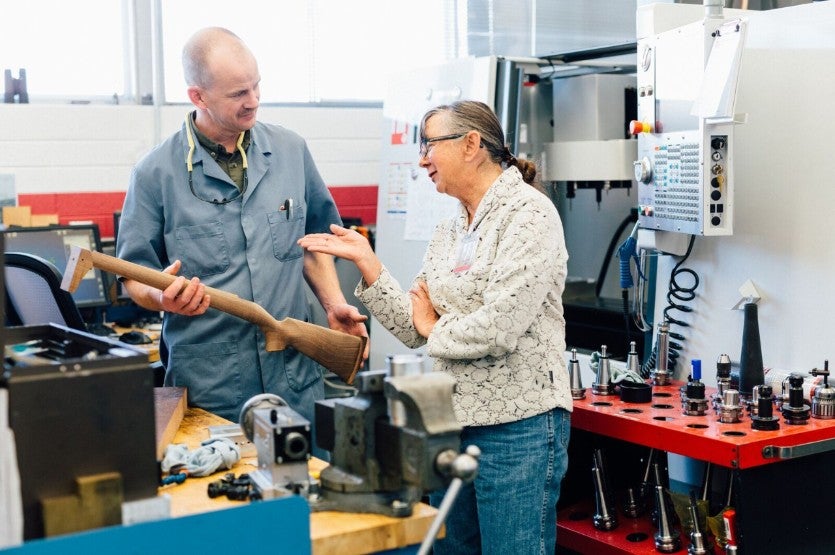 Word of the rifle’s discovery traveled fast in rural Nevada. In January of 2015 the gun was placed on display at The Border Inn, a local café in Baker, Nevada, during their annual Sheepherders’ Gathering. A number of residents turned out to see if it might be the same rifle that was mislaid by some ancestor. One ranching family saw the gun and realized with disappointment it wasn’t their grandpa’s lost Winchester, because that rifle had several strands of copper wire wrapped around the barrel to help keep the magazine tube in place.

Much of the emotional appeal of “The Lost 1873” comes from speculation as to how the rifle came to be resting against a tree in wilds of Eastern Nevada. Some have attributed it to cattle rustlers, outlaws on the run, lost miners or wandering pioneers. As a professional historian, Ms. Jensen is understandably reluctant to join in the speculation, but she revealed some important new details about the rustic gun’s condition.

“We’re continuing to do our research. We know that the gun was originally shipped from the Winchester factory in 1882 and that it was well-used,” observed Jensen. “It has some crude stock repairs at the wrist area using metal pins and what may have been a leather or rawhide wrap. The cartridge lifter and carrier block have been intentionally removed from inside the action, turning it into a single-shot rifle, but the gun’s screw slots are not damaged so it was probably not disassembled numerous times. The gun was found unloaded, but there was a single UMC 44-40 cartridge found in the butt-trap recess, and that type of cartridge was manufactured sometime between 1889 and 1911. Over the years there has been a great deal of hunting, prospecting, sheep-herding and Native American pine nut gathering in the area where the gun was found, but beyond that, well…”

"If only this gun could talk, what a story it would tell,” said Glenn Hatt, product manager for Winchester Repeating Arms. “ ‘The Lost 1873’ has captured the imagination of all those who love the Wild West, both here in America and around the globe. It’s wonderful that this unique rifle has finally made it home to the headquarters of Winchester Repeating Arms for a visit.”

So, if this gun could talk, what do you think it would say? What’s the real story behind the “The Lost 1873” and how it came to be leaning against a juniper tree in the wilds of Nevada?

Read the original article on the Lost Model 1873. 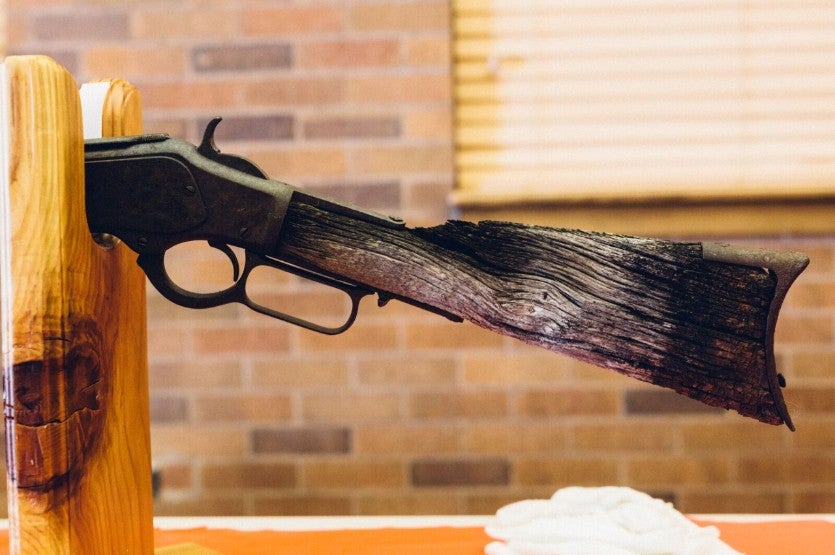 The rusted receiver and weathered buttstock of “The Lost Model 1873” are shown in detail. Made in 1882, the antique Winchester was found by NPS archeologists in November 2014, leaning against a juniper tree in Great Basin National Park in eastern Nevada. Winchester Repeating Arms photo. 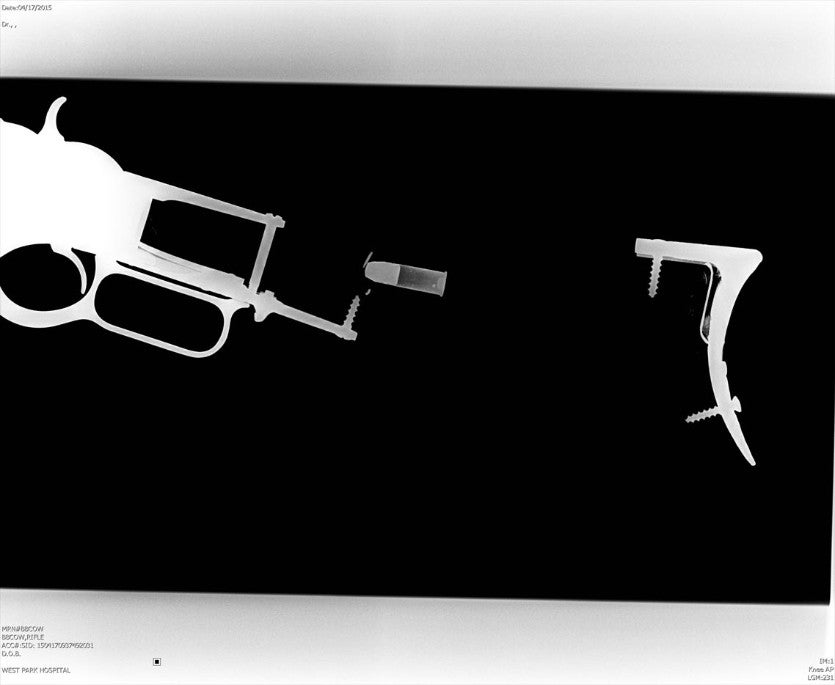 "The Lost Model 1873" was taken to the Cody museum where it was prepared for display. In the process it was x-rayed, and inside the storage compartment in the stock they found a single UMC 44-40 cartridge. 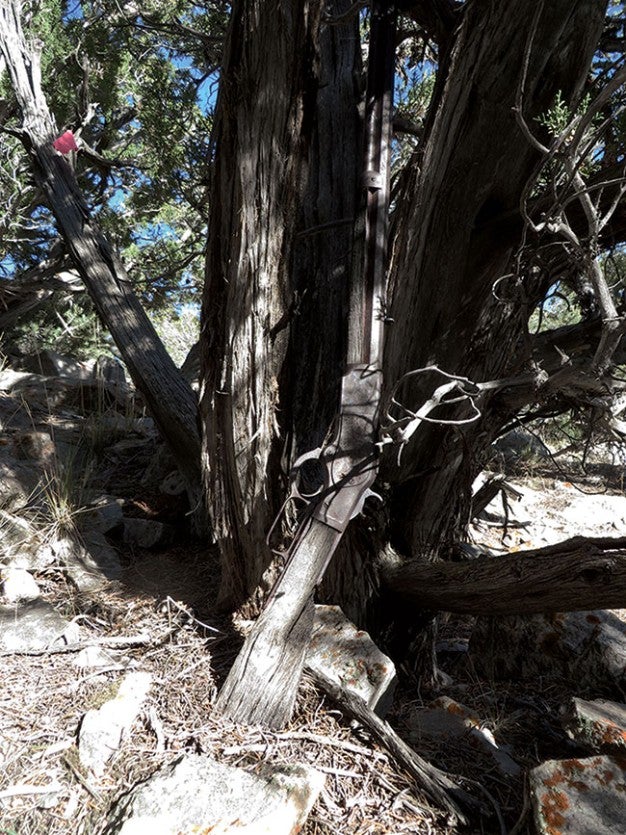 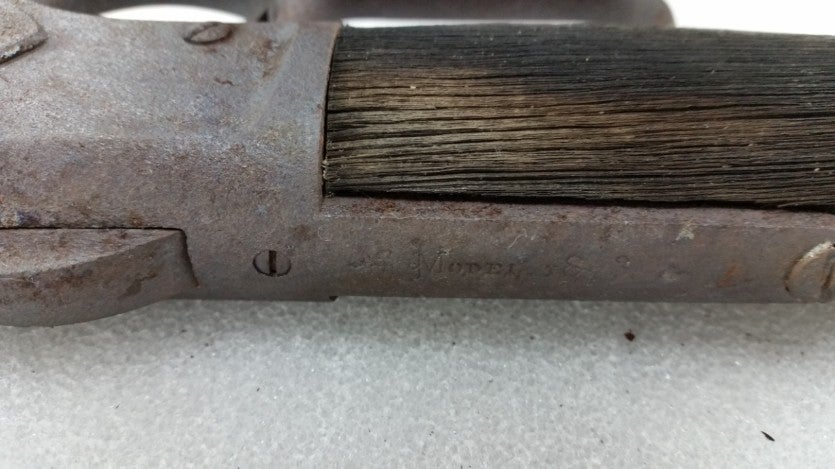 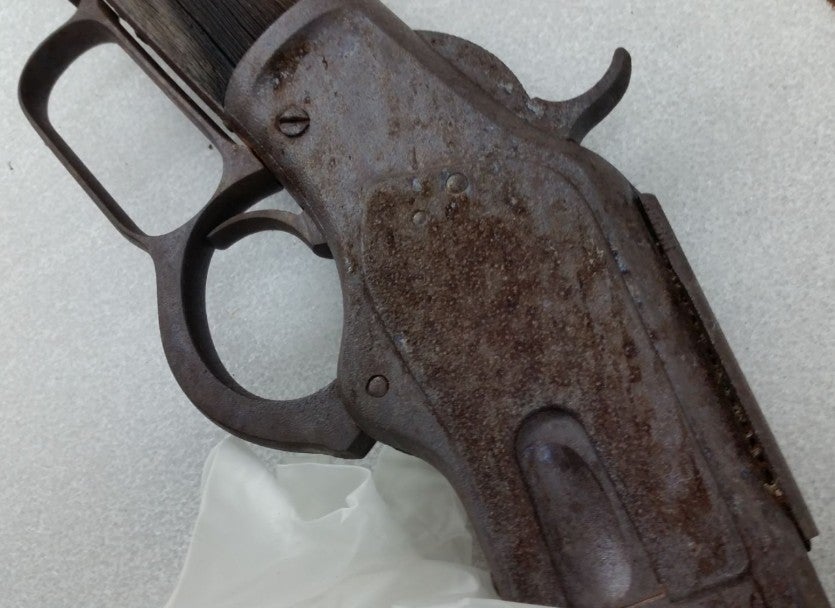 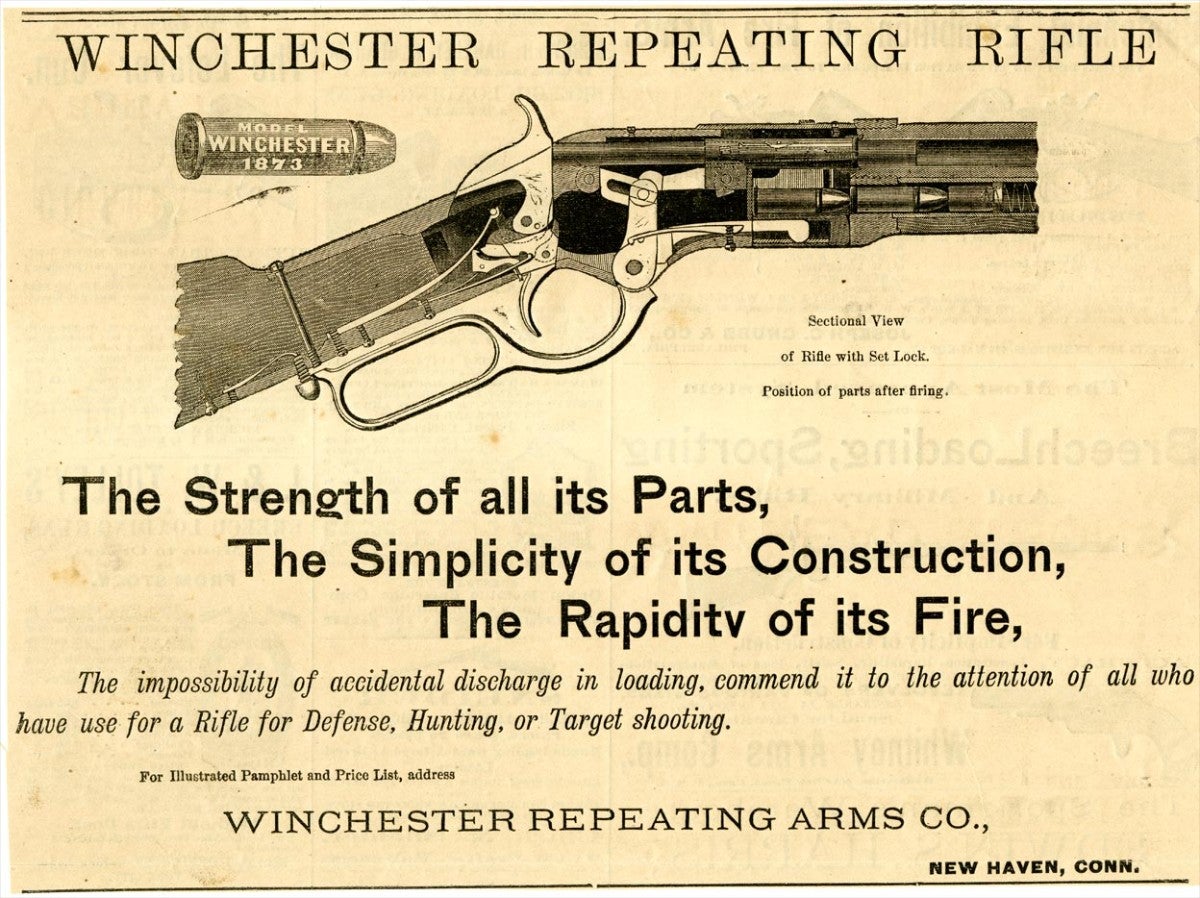 When you combine the effectiveness of the rifle itself with advertising like this, it's no wonder the Winchester 1873 changed the world of firearms forever.