Why the Model 70 is the World's Most Copied Bolt Action Rifle.

This ad originally appeared in 1999.

This page is for historical purposes of avid Winchester enthusiasts. Some aspects of the Model 70 have changed over time but today's Winchester Moel 70 continues to possess the same strong features and design properties that have made it the first choice of many hunters around the world since 1936. It still is The Rifleman's Rifle.

In some gun magazine somewhere, every bolt action rifle is eventually compared to a Winchester Model 70 Classic. The Model 70 was years ahead of its time when it was introduced. And today's Model 70's are even better. The "Classic" Model 70 configuration features important advantages like controlled round feed, claw extractor, manual ejector and more. This is the action sometimes referred to by gun writers as the "Pre -'64." But today's Model 70 Classic has set a new standard for engineering excellence. Here are a few reasons why it is so highly regarded by the experts.

1. The massive claw extractor improves reliability. Over 100 years ago Peter Paul Mauser developed an extractor design that remains the choice of the experts today. It is the claw extractor. The Model 70 Classic perfects this concept with a claw extractor that engages approximately 1/4 of the cartridge rim. Nobody plans on having problems with a sticky, hard-to-extract case, but when you do, the massive surface of the Model 70's claw gives you a better grip on the rim and greatly reduces the chance of ripping through the rim itself Because of this design, Model 70's are the standard for Africa-bound hunters who simply cannot afford to have an extraction failure. Although you may not be in danger on your next hunt, the success of your hunt does depend on your rifle extracting cartridges properly 100% of the time.

2. Controlled round feed assures greater reliability. Chambering a round with most bolt actions is achieved by the bottom of the bolt pushing forward against the top of the cartridge - with the cartridge moving forward while still being held by the magazine. At some point, about halfway into the forward motion, the cartridge leaves the control of the lips of the magazine. The bolt face simply continues to push the cartridge forward into the chamber. It remains "loose," as it travels from the magazine until it is fully forward in the chamber. On Model 70 Classic models, as the cartridge leaves control of the magazine. he base rises up on the bolt face and is captured between the claw extractor and the opposite edge of the bolt face. At this point, it is fully controlled by the bolt. Should you wish to stop chambering the round and eject it, you do not need to continue chambering the cartridge before ejecting. You simply work the bolt rearward, which extracts and ejects the round. Should a cartridge not want to chamber for any reason it is easy to eject the round by just working the bolt rearward. The bolt face retains control of the cartridge until it ejects. With conventional bolt designs, a very sticky case sometimes has to be pried loose from the chamber. You don't have to take that chance as long as you shoot a Model 70 Classic. 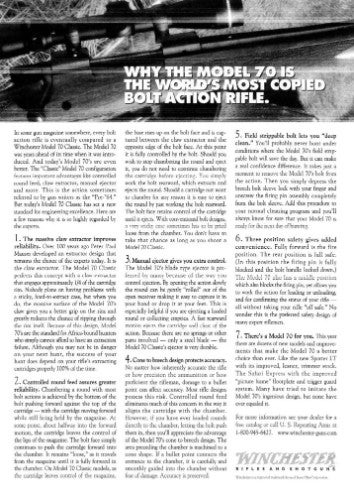 This ad originally ran in 1999 in numerous outdoor magazines. A number of Model 70 features have been improved since 1999, including the addition of the MOA Trigger system among others.

3. Manual ejector gives you extra control. The Model 70's blade-type ejector is preferred. by many because of the way you control ejection. By opening the action slowly the round can be gently "rolled" out of the open receiver making it easy to capture it in your hand or drop it at your feet. This is especially helpful if you are ejecting a loaded round or collecting empties. A fast rearward motion ejects the cartridge well dear of the action. Because there are no springs or other parts involved - only a steel blade - the Model 70 Classic's ejector is very durable.

4. Cone to breech design protects accuracy. No matter how inherently accurate the rifle or how precision the ammunition or how proficient the rifleman, damage to a bullet point can affect accuracy. Most rifle designs possess this risk. Controlled round feed eliminates much of this concern in the way it aligns the cartridge with the chamber. However, if you have ever loaded rounds directly to the chamber. letting the bolt push them in, then you'll appreciate the advantage of the Model 70's cone to breech design. The area preceding the chamber is machined to a cone shape. If a bullet point contacts the entrance to the chamber, it is carefully and smoothly guided into the chamber without fear of damage. Accuracy is preserved.

5. Field strippable bolt lets you "deep clean." You'll probably never hunt under conditions where the Model 70's field strippable bolt will save the day. But it can make a real confidence difference. It takes just a moment to remove the Model 70's bolt from the action. Then you simply depress the breech bolt sleeve lock with your finger and unscrew the firing pin assembly completely from the bolt sleeve. Add this procedure to your normal cleaning program and you'll always know for sure that your Model 70 is ready for the next day hunting.

6. Three-position safety gives added convenience. Fully forward is the fire position. The rear position is "on safe". (In this position the firing pin is fully blocked and the bolt handle locked down.) The Model 70 also has a middle position which also blocks the firing pin, yet allows you to work the action for loading or unloading, and for confirming the status. of your rifle - all without taking your rifle "off safe." No wonder this is the preferred safety design of many expert riflemen.

7. There's a Model 70 for you. This year there are dozens of new models and improvements that make the Model 70 a better choice than ever. Like the new Sporter LT with its improved, leaner, trimmer stock. The Safari Express with the improved "picture frame" floorplate and trigger guard system. Many have tried to imitate the Model 70's ingenious design, but none have ever equaled it.

NOTE: Some calibers, features, and configurations mentioned in this historic 1999 ad are no longer available.