In the July 2017 issue of the NRA’s Shooting Sports USA magazine, gunwriter Larry Case and other shooters put the Winchester Super X3 Composite through its paces. 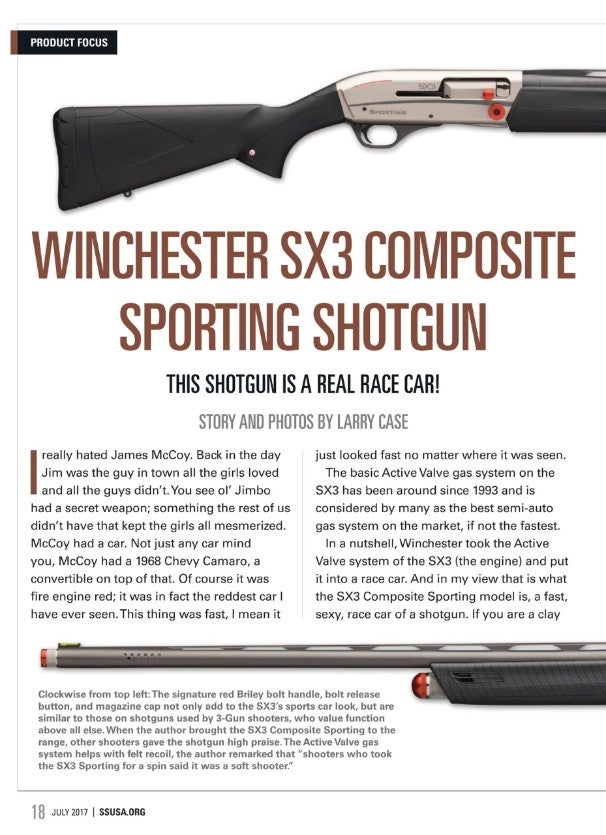 “The SX3 Composite Sporting is a fast, sexy race car of a shotgun.”

A comparison can be drawn (and often is) between race cars and race guns. Both are designed to run full out, to be as reliable as modern materials and engineering can make them, and to look pretty good even when they are just standing still.

In the July 2017 issue of the NRA’s Shooting Sports USA magazine, gunwriter Larry Case and other shooters put the Winchester Super X3 Composite Sporting through her paces and had nothing but high praise for this fast-shooting, soft-recoiling autoloader.

Case opened his article recalling a friend from his youth who owned a bright fire-red 1968 Chevy Camaro convertible. “This thing was fast, I mean it just looked fast no matter where it was seen,” recalled Case. From here he began drawing race car comparisons to the Super X3 Composite Sporting from Winchester Repeating Arms. 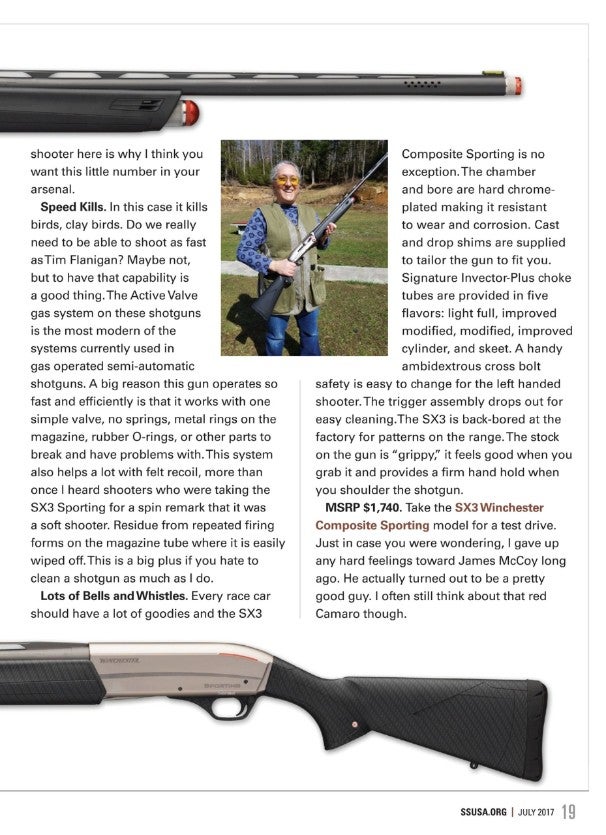 “The basic Active Valve gas system on the SX3…is considered by many as the best semi-auto gas system on the market, if not the fastest,” Case continued. “In a nutshell, Winchester took the Active Valve system of the SX3 (the engine) and put it into a race car. And in my view that is what the SX3 Composite Sporting is, a fast, sexy race car of a shotgun. If you are a clay shooter here is why I think you want this little number in your arsenal.”

“Speed Kills. And in this case, it kills birds, clay birds. Do we really need to shoot (this) fast…?” asked Case rhetorically. “Maybe not, but to have the capability is a good thing. The Active Valve gas system in these shotguns is the most modern of the systems currently used in gas-operated semi-automatic shotguns.”

“Speed Kills. And in this case it kills birds, clay birds.”

“Every race car should have a lot of goodies, and the SX3 Composite Sporting is no exception.”

“Every race car should have a lot of goodies, and the SX3 Composite Sporting is no exception,” Case sagely observed. Case goes on to list many of the outstanding features that are standard equipment on the SX3 Composite Sporting - goodies like a chrome-plated chamber and bore, back-bored barrel, five Invector-Plus Signature extended choke tubes, an ambidextrous cross-bolt safety, a drop-out trigger group, and a grippy synthetic stock with an eye-catching carbon fiber finish.

There is plenty more you’ll want to learn about the race-ready Winchester Super X3 Composite Sporting autoloader. Check one out at your local Winchester Repeating Arms dealer today.

You can read the entire NRA Shooting Sports USA article by Larry Case online at www.ssusa.org/articles/2017/4/24/winchester-sx3-composite-sporting-shotgun/