On the first day of the 2016 SHOT Show in Las Vegas, attendees were treated to great article in SHOT Daily by Dave Draper on the 150th anniversary of the Winchester brand entitled “Leading the Way.”

“…When it comes to icons, Winchester leads the way…”

“Other companies may argue the point, but when it comes to icons, Winchester leads the way in the firearms and ammunition industry,” opened Draper. “This year marks the 150th anniversary of the legendary brand and while the it hasn’t always been an easy road, Winchester is as strong today as it has been at any point in its history.”

“…The history of Winchester properly begins in 1866,” continues Draper. “That year…Oliver Winchester reorganized New Haven Arms under the Winchester Repeating Arms Company banner. The newly formed company quickly introduced the Model 1866, nicknamed the Yellow Boy after its polished brass receiver.” (You’ll be pleased to learn that, in commemoration of 150 years of making the world’s best lever-actions, Winchester Repeating Arms has just reintroduced the Model 1866 “Yellow Boy!”) 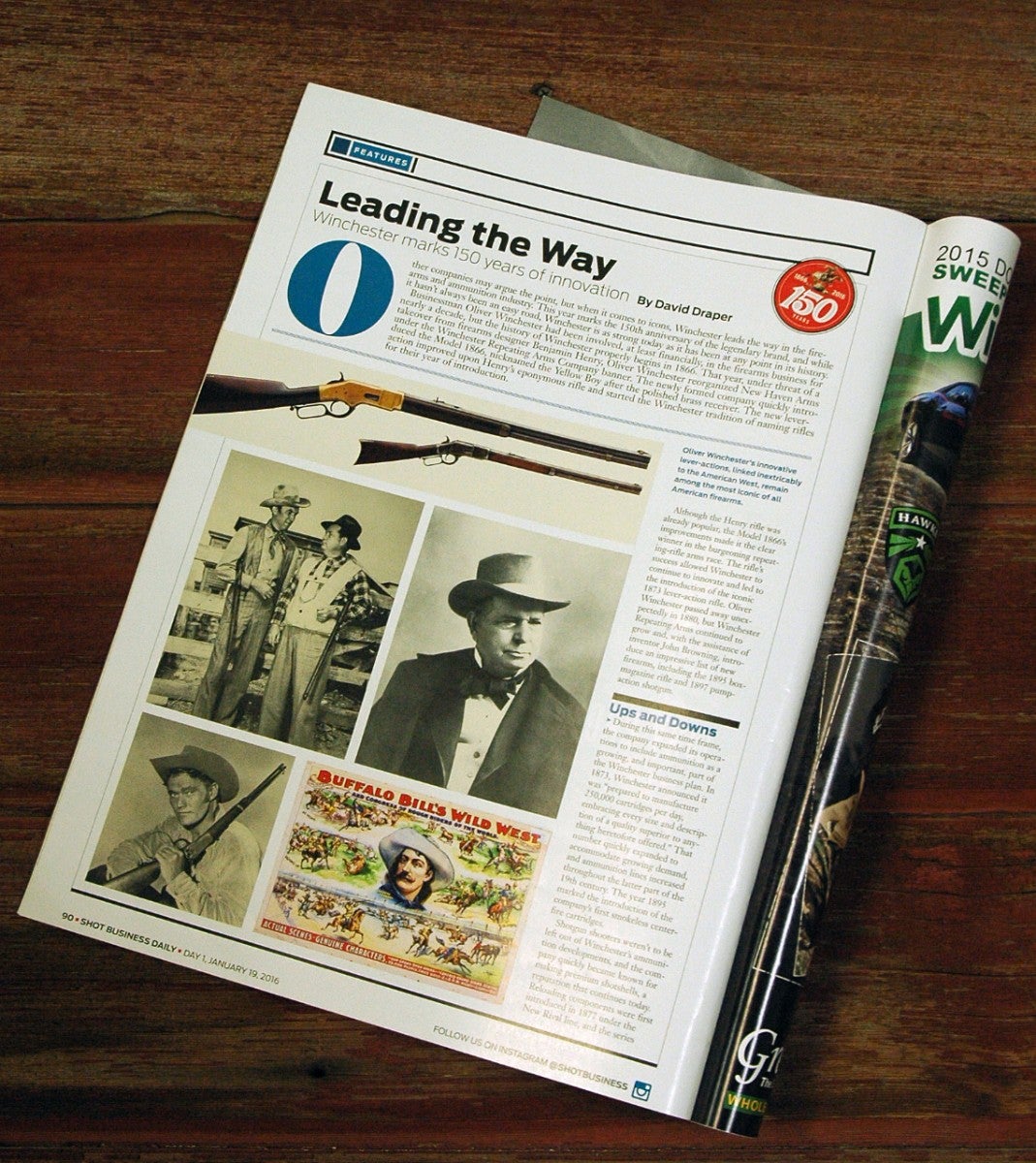 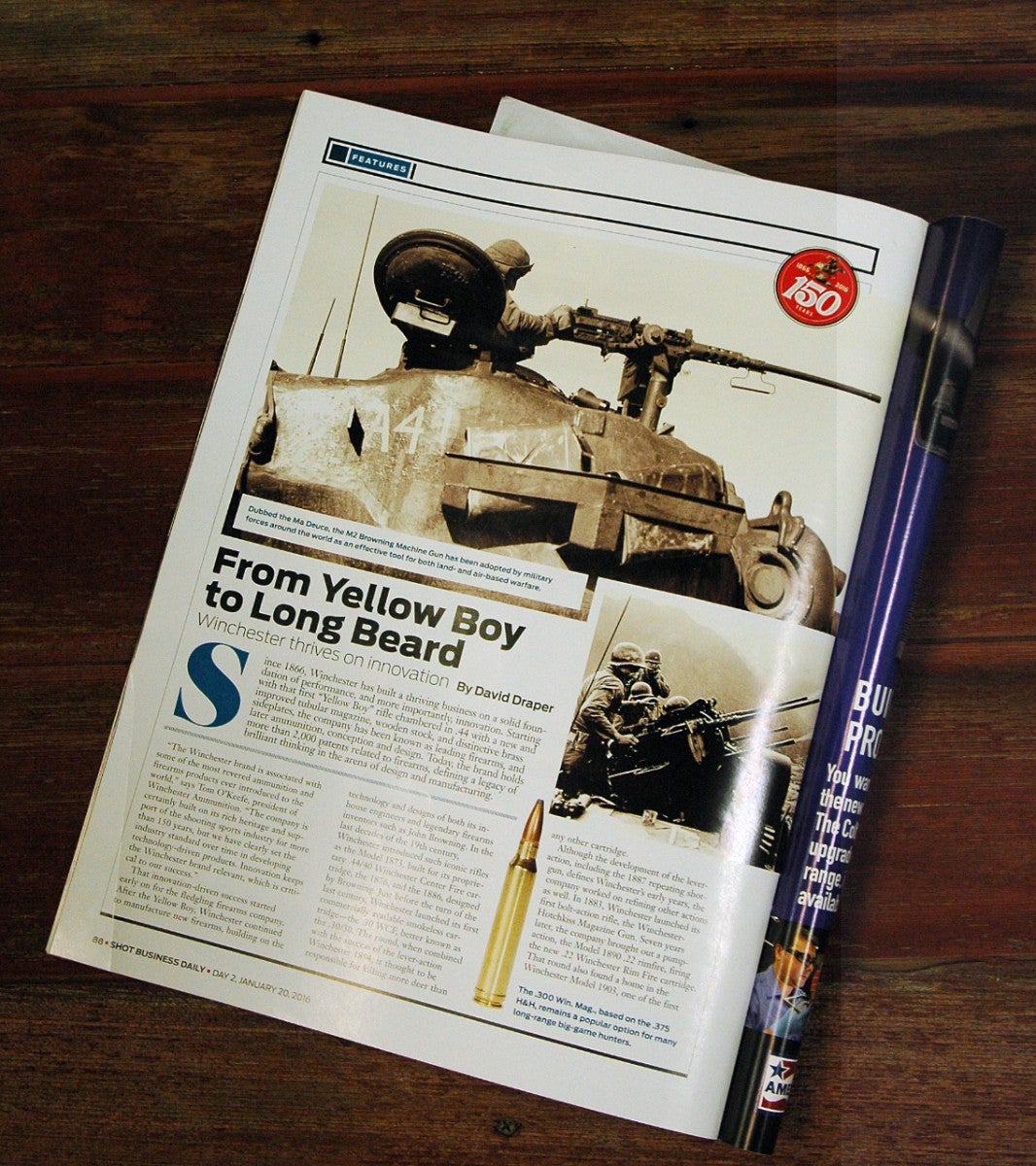 “…at the end of WW I…(Winchester) found itself with ‘…magnum-sized capacity without much need’.”

Draper goes on to recount in detail the growth of the Winchester corporate empire, covering firearms. Ammunition and accessories. The author also  explores the challenges faces by the New Haven-based company at the end of WW I, when the company found itself with “…magnum-sized capacity without much need.” Various avenues were explored, but by 1931 the company faced financial ruin, until Western Cartridge and the Olin Corporation stepped in and purchased the remaining company assets. This new relationship thus set the stage for Winchester’s tremendous contribution to the Allied war effort during WW II and its prominence during the post-war boom in the shooting sports.

Additional challenges confronted the firearms side of Winchester in the 1960s and 1970s. In 1980 Olin sold the New Haven portion of the business to its factory employees, and over the following decade additional portions of that company were acquired by Fabrique Nationale, the international arms maker that also owns Browning. FN continues to direct the firearms side of the Winchester brand today.

“There are not many brands in any industry that last 50 years, let alone three times that long,” concludes Draper. “And of those, few retain the legendary status and loyal customer base as Winchester has (since 1866). Like any good origin story, this one has its plot twists, peaks and valleys, but through it all the brand has stood firm. Reliable, hard-working, and with a few hard-earned scratches, today’s Winchester wears just like a good rifle should.”

“Reliable, hard-working, and with a few hard-earned scratches, today’s Winchester wears just like a good rifle should.”

If you were at the SHOT Show and picked up a copy of the Day 1 edition of SHOT Daily, Draper’s article begins on page 90. If you’d like to read the entire article online it begins on page 47 of the digital version. Here’s a link to the web edition: