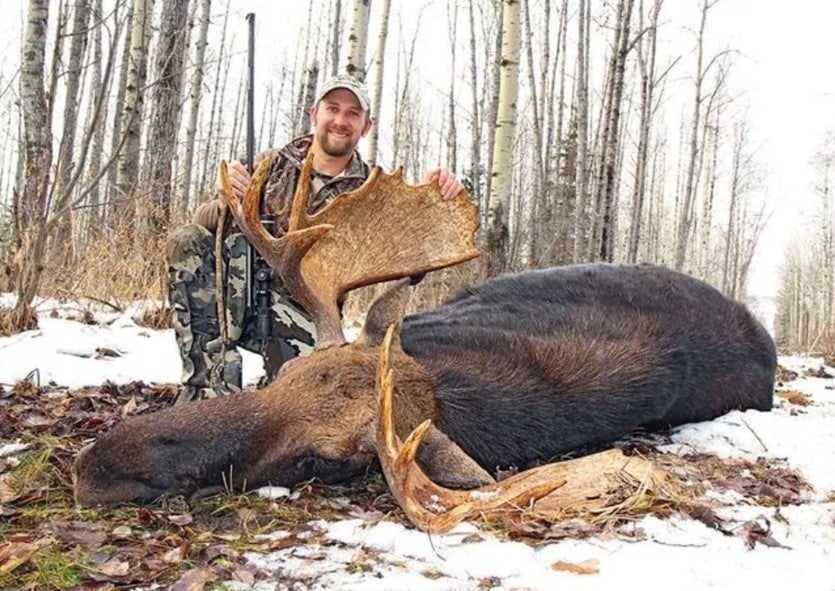 All of us have a list of once-in-a-lifetime hunts and outdoor adventures we’d like to experience before we “kick the bucket.” In the October 2017 issue of Field and Stream, noted gunwriter Will Brantley took his bull of a lifetime with a Winchester XPR in 300 WSM.

“(The XPR) shot sub-MOA out of the box, and fed smooth as silk.”

“Northwest Alberta is bleak and beautiful—a place where wolves and bears and beavers live alongside tough Canucks like McInnis,” Brantley began. “The countryside is a mix of dark Canadian bush and rolling crop fields, and it’s teeming with whitetails, mule deer, elk, and Canada moose—including some good bulls.”

“But this isn’t a trip you can do yourself,” Brantley continues.   “Alberta requires nonresidents to hunt with a guide for big game. Moose hunts here average $5,000 to $7,000…Unless you’ve been pricing moose hunts lately, that doesn’t sound cheap. But if chasing a bull moose in the northern wilds is your idea of a dream hunt, I’m not sure there’s a better value to be found.”

“(The XPR) shot sub-MOA out of the box, and fed smooth as silk.”

The rifle Brantley chose for his epic hunt was the rugged and accurate Winchester XPR. “I used a Winchester XPR Hunter Vias in .300 WSM on my moose hunt,” he recounts “It…shot sub-MOA out of the box, and fed smooth as silk. (After the hunt) it was covered in mud…but I sprayed it off with a hose at camp, oiled it a bit, and took it coyote hunting the next day.”

“I shouldered my rifle, dropped the crosshair on the bull’s chest, and fired.”

And how did Brantley’s XPR perform during the hunt? “I caught a flash of antler moving through the trees to our right, and within seconds a bull moose trotted into plain view in the trail, 180 yards away,” he proudly recalls. “There was no time to kneel for a rest. I shouldered my rifle, dropped the crosshair on the bull’s chest, and fired. The moose wheeled around, and I fired a second shot over his back. Instead of disappearing into the trees, the bull just stopped. I took a breath, settled the crosshair, and fired a third shot that hit him in the lungs, but it wasn’t needed. The bull was already collapsing from the first bullet.”

“You think to yourself, Only in a place this wild.”

“When you’re accustomed to whitetails, walking up on something the size of a moose is intimidating,” Brantley concluded. “You’ve seen the tracks and sign—but not until its full form is there in front of you can you grasp the size of this animal that seems ghostlike in the bush. You think to yourself, Only in a place this wild.”

Choosing the value-packed Winchester XPR as your next big game rifle will leave some extra funds available for your own epic hunt. You can read Brantley’s full story in the October issue of Field and Stream, available on your local newsstand, or go online and visit: