Barrel Rifling. What is it?

There are a number of different ways to impart rifling to the inside of a rifle's bore. Some sources indicated that rifling was invented near the end of the fifteenth century in Augsburg, Germany. Despite that, actually finding a rifle that has been rifled during that era is very rare and certainly not found on every rifle, despite its benefits to accuracy. Rifling did not become commonplace until the nineteenth century. (Wikipedia and other sources)

In the United States, rifling played a key role in the actual history of the war for independence. During the war, most military rifles involved were smoothbores with an effective range of a bit over 50 yards, but the militias -- the citizen army made up of ordinary people and many frontiersmen -- used much finer rifles with rifled bores that were capable of effective ranges reaching out several hundred yards. These were "long rifles" or "Kentucky rifles" as they are most often called. They proved very effective and made a contribution to battlefield successes on occasion and played a key role in guerrilla warfare, benefitting the colonists.
.

The process. Rifling is the process of creating grooves inside the bore of a rifle, pistol and some shotguns. These grooves cause the projectile to spin as it moves down the barrel and exits the muzzle. The spinning of the bullet imparts a greatly increased amount of bullet stability which significantly increases accuracy. Before rifling, the accuracy of smoothbore rifles and pistols was greatly limited.

Does your Winchester have button rifling or some other type? Usually the type of rifling used on the barrels of your firearm will be indicated with the product family descriptions.

In general, rifling is created in one of the following ways: 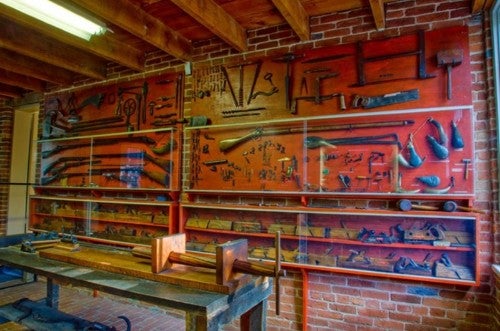 On the work table is an example of a wooden rifling device commonly used in the 1840s in the United States. In the display are examples of early American gunsmithing tools.